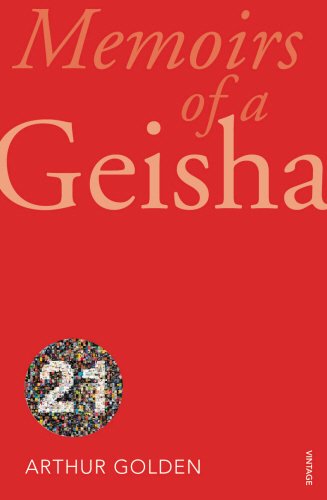 Memoirs Of A Geisha
by Arthur Golden

In Stock
$11.49
+10% GST
Tells the story of a geisha girl. Summoning up years of Japan's most dramatic history, this title conjures up the perfection and the ugliness of life behind rice-paper screens, where young girls learn the arts of geisha - dancing and singing, how to wind the kimono, how to walk and pour tea, and how to beguile the most powerful men.
Very Good Good Well Read
Only 2 left

Memoirs Of A Geisha Summary

Memoirs Of A Geisha: Vintage 21 edition by Arthur Golden

This is a seductive and evocative epic on an intimate scale, which tells the extraordinary story of a geisha girl. Summoning up more than twenty years of Japan's most dramatic history, it uncovers a hidden world of eroticism and enchantment, exploitation and degradation. From a small fishing village in 1929, the tale moves to the glamorous and decadent heart of Kyoto in the 1930s, where a young peasant girl is sold as servant and apprentice to a renowned geisha house. She tells her story many years later from the Waldorf Astoria in New York; it exquisitely evokes another culture, a different time and the details of an extraordinary way of life. It conjures up the perfection and the ugliness of life behind rice-paper screens, where young girls learn the arts of geisha - dancing and singing, how to wind the kimono, how to walk and pour tea, and how to beguile the most powerful men.

Memoirs Of A Geisha Reviews

"A startling debut.... By turns fairy tale, romance, coming of age and historical first novel, Memoirs of a Geisha is an astounding magic act."
-"Ottawa Citizen
""A fascinating, poignant and entirely believable tale, as delicate, intricate and beautiful as the silk kimonos so central to the story.... Captivating ... lush [and] lyrical.... This is a luxurious book, every page fat with evocative, beautiful words.... If life is a simple stream, Memoirs of a Geisha is a shimmering pebble that makes the water dance."
-"The Toronto Sun
""A startling act of literary impersonation, a feat of cross-cultural masquerade on the order of Kazuo Ishiguro's The Remains of the Day.... Golden's description of a kept woman's fleshly epiphanies has the purity of Colette."
-"Vogue
""Cause for celebration.... Rarely has a world so closed and foreign been evoked with such natural assurance.... In the unforgettable Sayuri, Golden has found the heart and matter of a truth that lies beyond detail."
-"The New Yorker
""A truly engrossing story. The reader suffers, triumphs, dreams and doubts with the heroine, all the way through.... Beautifully written."
-"Sunday Express
""Exceptional....This is one of those rare novels that evokes a vanished world with absolute conviction."
-"Daily Mail"

"From the Paperback edition."

"A story with the social vibrancy and narrative sweep of a much-loved 19th century bildungsroman. . . . This is a high-wire act. . . . Rarely has a world so closed and foreign been evoked with such natural assurance." --The New Yorker

Arthur Golden was born and brought up in Chattanooga, Tennessee. He is a 1978 graduate of Harvard College with a degree in art history, specialising in Japanese art. In 1980 he earned an MA in Japanese history from Columbia where he also learned Mandarin Chinese.

GOR003603286
Memoirs Of A Geisha: Vintage 21 edition by Arthur Golden
Arthur Golden
Used - Very Good
Paperback
Vintage Publishing
2011-08-04
512
0099563088
9780099563082
N/A
Book picture is for illustrative purposes only, actual binding, cover or edition may vary.
This is a used book - there is no escaping the fact it has been read by someone else and it will show signs of wear and previous use. Overall we expect it to be in very good condition, but if you are not entirely satisfied please get in touch with us.