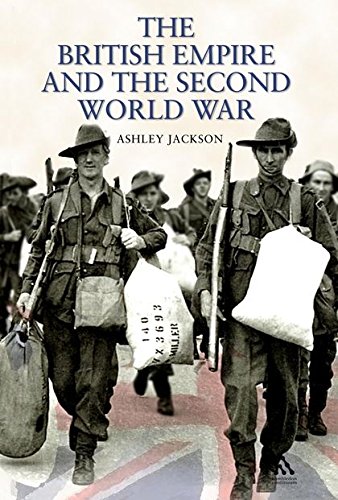 The British Empire and the Second World War
by Ashley Jackson

The British Empire and the Second World War Summary

The British Empire and the Second World War by Ashley Jackson

In 1939 Hitler went to war not just with Great Britain; he also went to war with the whole of the British Empire, the greatest empire that there had ever been. In the years since 1945 that empire has disappeared, and the crucial fact that the British Empire fought together as a whole during the war has been forgotten. All the parts of the empire joined the struggle and were involved in it from the beginning, undergoing huge changes and sometimes suffering great losses as a result. The war in the desert, the defence of Malta and the Malayan campaign, and the contribution of the empire as a whole in terms of supplies, communications and troops, all reflect the strategic importance of Britain's imperial status. Men and women not only from Australia, New Zealand and India but from many parts of Africa and the Middle East all played their part. Winston Churchill saw the war throughout in imperial terms. The British Empire and the Second World War emphasises a central fact about the Second World War that is often forgotten.

Customer Reviews - The British Empire and the Second World War

The British Empire and the Second World War Reviews

'an impressive work...Jackson deserves considerable congratulations for a most interesting work...Readers of this journal will find much of value here.' Jeremy Black, RUSI Journal, 2006--Sanford Lakoff
'[a] splendid and long-overdue study...It is a thorough and comprehensive work that neither glamorizes the Imperial war effort nor cherry-picks the more dramatic contributions.'--Sanford Lakoff "Times Literary Supplement "
'The great merit of this well-researched book is that it provides page after page of documented detail supporting the main proposition....The book will appeal massively to readers who enjoy the simple possession of facts; and any study that encourages scepticism of too Eurocentric a view of history, especially of British history, is greatly to be welcomed.'- Gordon Johnson Times Higher Education Supplement--Sanford Lakoff "Times Higher Education Supplement "
"engrossing and substantial study" "like the british empire itself, this book is vast, sprawling and impressive" Asian Affairs, nov 2007--Sanford Lakoff
"As the title indicates, this work deals with the role 60 or more political entities more or less tied to the United Kingdom - crown colonies, Dominions, mandates, protectorates, and many more - played in the 'British' war effort...It's an impressive contribution, as he shows what even the smallest and most obscure entities within the Empire contributed to the war, from the Indian Princely States to British Honduras to the Maldive Islands and others. In the process, he also provides a unique insight into the extremely complex strategic concerns of a truly global empire in a truly global war." - New York Military Affairs Symposium Review, 2009
"Carefully researched and well-written, The British Empire and the Second World War is encyclopedic in its content and fills a gap in the study of World War II. It is the first single-volume of the subject." -Bowling Green Daily News
"engrossing and substantial study""like the british empire itself, this book is vast, sprawling and impressive"Asian Affairs, nov 2007--,
'There have been few single volume books on this episode. Ashley Jackson...has filled that gap with an insightful and deeply researched work that will be a useful source for anyone interested in the subject. The book is nicely produced and good value...Jackson has achieved something wholly admirable; he has ensured that nobody should ever again take seriously the notion of Britain "standing alone"' BBC History Magazine, Denis Judd, 01/08/2006
"This book is elegantly written, superbly structured, and deserves a wide readership far beyond that of academic specialists." Reveiwed by Ritchie Ovendale in English Historical Review, February 2008

GOR003568344
The British Empire and the Second World War by Ashley Jackson
Ashley Jackson
Used - Very Good
Hardback
Bloomsbury Publishing PLC
2006-03-09
640
1852854170
9781852854171
N/A
Book picture is for illustrative purposes only, actual binding, cover or edition may vary.
This is a used book - there is no escaping the fact it has been read by someone else and it will show signs of wear and previous use. Overall we expect it to be in very good condition, but if you are not entirely satisfied please get in touch with us.