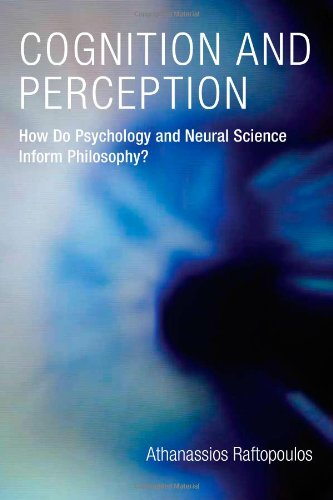 Cognition and Perception
by Athanassios Raftopoulos (University of Cyprus)

In Stock
$35.99
inc. GST
An argument that there are perceptual mechanisms that retrieve information in cognitively and conceptually unmediated ways and that this sheds light on various philosophical issues.
Very Good
Only 1 left

Cognition and Perception: How Do Psychology and Neural Science Inform Philosophy? by Athanassios Raftopoulos (University of Cyprus)

An argument that there are perceptual mechanisms that retrieve information in cognitively and conceptually unmediated ways and that this sheds light on various philosophical issues. In Cognition and Perception, Athanassios Raftopoulos discusses the cognitive penetrability of perception and claims that there is a part of visual processes (which he calls "perception") that results in representational states with nonconceptual content; that is, a part that retrieves information from visual scenes in conceptually unmediated, "bottom-up," theory-neutral ways. Raftopoulos applies this insight to problems in philosophy of science, philosophy of mind, and epistemology, and examines how we access the external world through our perception as well as what we can know of that world. To show that there is a theory-neutral part of existence, Raftopoulos turns to cognitive science and argues that there is substantial scientific evidence. He then claims that perception induces representational states with nonconceptual content and examines the nature of the nonconceptual content. The nonconceptual information retrieved, he argues, does not allow the identification or recognition of an object but only its individuation as a discrete persistent object with certain spatiotemporal properties and other features. Object individuation, however, suffices to determine the referents of perceptual demonstratives. Raftopoulos defends his account in the context of current discussions on the issue of the theory-ladenness of perception (namely the Fodor-Churchland debate), and then discusses the repercussions of his thesis for problems in the philosophy of science. Finally, Raftopoulos claims that there is a minimal form of realism that is defensible. This minimal realism holds that objects, their spatiotemporal properties, and such features as shape, orientation, and motion are real, mind-independent properties in the world.

Cognition and Perception is a must read for both cognitive scientists and philosophers. The scientific part is thorough, accurate, and up-to-date; the philosophical one is rich in arguments, interesting, and not afraid to challenge mainstream philosophical ideas about consciousness, awareness, introspection, conceptual and non-conceptual content. -Balkan Journal of Philosophy
A worthy and largely successful enterprise....by the end of the book I was convinced that philosophers could learn an awful lot from psychologists. -Perception

About Athanassios Raftopoulos (University of Cyprus)

Athanassios Raftopoulos is Associate Professor of Epistemology and Cognitive Science in the Department of Psychology at the University of Cyprus.

GOR009567213
Cognition and Perception: How Do Psychology and Neural Science Inform Philosophy? by Athanassios Raftopoulos (University of Cyprus)
Athanassios Raftopoulos (University of Cyprus)
A Bradford Book
Used - Very Good
Hardback
MIT Press Ltd
2009-07-17
448
0262013215
9780262013215
N/A
Book picture is for illustrative purposes only, actual binding, cover or edition may vary.
This is a used book - there is no escaping the fact it has been read by someone else and it will show signs of wear and previous use. Overall we expect it to be in very good condition, but if you are not entirely satisfied please get in touch with us.