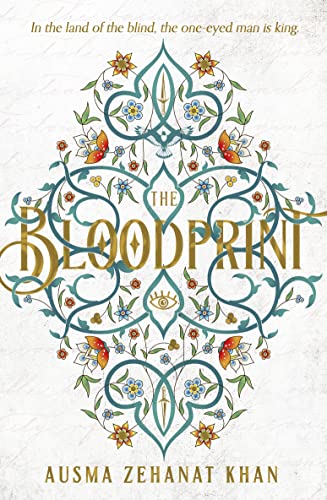 The Bloodprint
by Ausma Zehanat Khan

The author of the acclaimed mystery The Unquiet Dead delivers her first fantasy novel-the opening installment in a thrilling quartet-a tale of religion, oppression, and political intrigue that radiates with heroism, wonder, and hope.

The Bloodprint (The Khorasan Archives, Book 1) by Ausma Zehanat Khan

The author of the acclaimed mystery The Unquiet Dead delivers her first fantasy novel-the opening installment in a thrilling quartet-a tale of religion, oppression, and political intrigue that radiates with heroism, wonder, and hope.

A dark power known as the Talisman has risen in the land. Born of ignorance and persecution, it is led by a man known only as the One-Eyed Preacher. A superstitious patriarchy, cruel and terrifying, the Talisman suppresses knowledge and subjugates women. And it is growing.

But there are those who seek to stop the oppressive spread of the Talisman. A resistance formed of the Companions of Hira - a group of rebels versed in the power of ancient scripture, a magic known as the Claim - believe they have discovered the key to destroying the One-Eyed Preacher and his fervid followers: The Bloodprint.

Finding this dangerous manuscript that the Talisman has tried to erase from the world promises to be their most dangerous undertaking yet: a perilous journey deep into Talisman territory which may prove to be their last.

`The Bloodprint is somewhere between N.K. Jemisin and George R.R. Martin. You're going to love it'
Saladin Ahmed, author of Throne of the Crescent Moon

`Sweeping its readers up for a fantastical journey across a broken yet beautiful Silk Road, The Bloodprint is extraordinary. The book is wonderfully written; its poetic prose and mix of history, faith, and adventure reminiscent of a post-apocalyptic Odyssey...this time with a pair of women warriors at the helm'
S.A. Chakraborty, author of The City of Brass

AUSMA ZEHANAT KHAN holds a Ph.D. in International Human Rights Law with a specialization in military intervention and war crimes in the Balkans. She is the award-winning author of The Unquiet Dead. She is a former adjunct law professor and was Editor-in-Chief of Muslim Girl magazine, the first magazine targeted to young Muslim women. A British-born Canadian, Khan now lives in the USA with her husband.

GOR008920060
The Bloodprint (The Khorasan Archives, Book 1) by Ausma Zehanat Khan
Ausma Zehanat Khan
The Khorasan Archives
Used - Very Good
Hardback
HarperCollins Publishers
2017-10-19
448
0008171572
9780008171575
N/A
Book picture is for illustrative purposes only, actual binding, cover or edition may vary.
This is a used book - there is no escaping the fact it has been read by someone else and it will show signs of wear and previous use. Overall we expect it to be in very good condition, but if you are not entirely satisfied please get in touch with us.