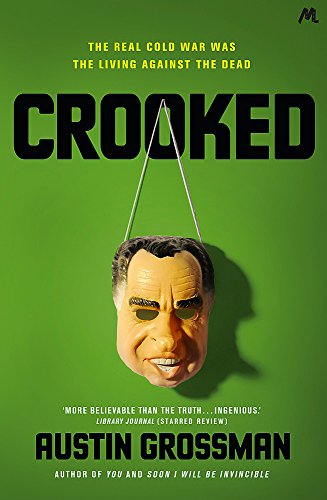 Used Price
$22.49
inc. GST
Free Shipping in Australia
The real Cold War was between the living and the dead... and America's worst president was its last line of defense in this amazingly bold counter-historical satire in which twentieth-century politics meets Lovecraft.
Like New Very Good

This is the story of the great con game that was the late twentieth century, of American history's worst presidency, of how I learned to lie. It is not history as you know it. There are at least three sides to this story, and I'm telling both of mine.

I promise you I will show the same contempt for the historical record that it has shown for me.

My name is Richard Milhous Nixon. I swore an oath to preserve, protect and defend the Constitution, and I have seen the devil walk.

An alternate history, a horror novel, a political satire and a study of what people will sacrifice to succeed, CROOKED is the ultimate inside story of the strange, all-too-human monsters at the heart of American power.

Riffs on H.P. Lovecraft's Cthulhu mythos in all its eldritch glory and creates an antihero as tormented as any Marvel or DC villain: Richard Nixon, 37th president of the United States. * LA Times *
A funny, intelligent fictional take on Nixon, in which our man has a lot more than dark omens, Dan Rather and subpoenas to worry about... clever. * Dallas News *
A fiendishly entertaining book... The imaginative power Grossman deploys in Crooked is staggering. * Bookpage *
An audacious genre-bending novel...a fine job of combining history, thriller, and weird tale. * Publishers Weekly *
Grossman's vision of the secret history of Richard M. Nixon is as eerie and absorbing as it is fantastically ludicrous... a beautifully tangled mix of ambition, bitterness, isolation and self-mockery, leavened with a noble sense of self-sacrifice. * NPR *
Ingenious... Grossman succeeds in making his fantastic explanation seem more believable than the truth. This novel works as gleeful satire, as wacky alternate history, and as thriller, but what really shines is the character study at its center. * Library Journal *
A brilliant mix: the flawed antihero, self-detesting and yet driven, cast as the punchline to every American political joke right up to the Clinton impeachment. Throw in the Cthulhu mythos and some meticulous historical research and you've got a novel that transcends satire and stands on its own. This would be an amazing book even if you'd never heard of Richard Nixon. -- Cory Doctorow * BoingBoing *
At once wildly imaginative and deeply intimate, CROOKED is a demonically fun political thriller. The brilliance of Austin Grossman is in making big stories personal, even when the big story is super-powered presidents and intercontinental necromantic missiles. -- Max Barry, author of LEXICON

Austin Grossman is a video game design consultant and the author of CROOKED, YOU and Soon I Will Be Invincible. His writing has appeared in Granta, the Wall Street Journal, and the New York Times.

GOR009306863
Crooked by Austin Grossman
Austin Grossman
Used - Like New
Paperback
Hodder & Stoughton General Division
2015-07-28
368
1444729985
9781444729986
N/A
Book picture is for illustrative purposes only, actual binding, cover or edition may vary.
The book has been read, but looks new. The book cover has no visible wear, and the dust jacket is included if applicable. No missing or damaged pages, no tears, possible very minimal creasing, no underlining or highlighting of text, and no writing in the margins.