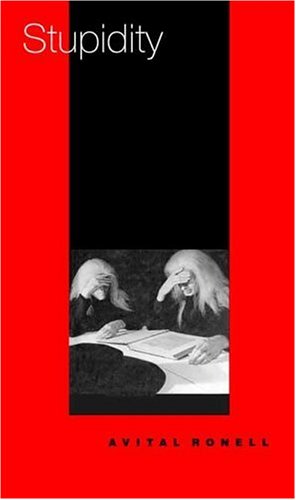 Nietzsche, Einstein and Deleuze agree: the question of stupidity, its unremitting sway, needs to be dealt with.

This book explores the urgency of stupidity, its hiding places as well as its everyday public appearances. It maps areas of thought in which stupidity has been traditionally concealed or repressed and tunes into stupidity's static in the realms of literature, philosophy and politics. Neither a moral default nor a pathology, stupidity has no duty to truth yet nonetheless bears ethical consequences. At the same time there is something about stupidity -- what Musil and Deleuze locate as "transcendental stupidity" -- that is untrackable; it evades our cognitive scanners and turns up as the uncanny double of mastery or intelligence. A major phobia in the lexicon of learning, stupidity opens up new unintelligibilities, as Schlegel might have said -- an unexpected range of explosive stammers -- marking at times a new beginning, the philosophical primal scene of stupor.

Stupidity points to what has been historically inappropriable -- the banality and stupidity of evil, as Hannah Arendt says of Eichmann.

On some level stupidity is a "feminine" problem, or has been evicted from philosophical premises to occupy what is marked as feminine incertitude. Still, poets such as Holderlin and Rilke claimed the predicament of stupidity (or sheer idiocy) as reflecting the true nature of poetic origination. The work studies the modulation of stupidity into idiocy, puerility, and the figure of the ridiculous philosopher, instituted by Kant. Investigating ignorance, dumb-foundedness, and the limits of reason, it probes the pervasive practice of theory-bashing in supposedly intelligent socialsectors. A section on prolonged and debilitating illness pushes the text to an edge of corporeal understanding, "at the limits of what the body knows and tells."