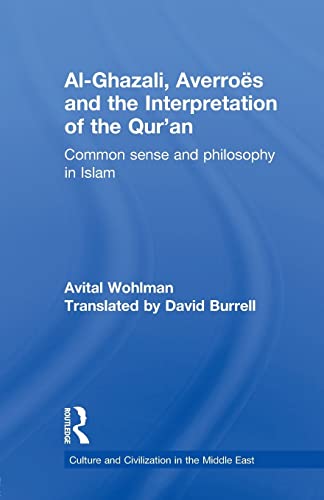 Al-Ghazali, Averroes and the Interpretation of the Qur'an by Avital Wohlman (Hebrew University of Jerusalem, Israel)

Al-Ghazali, Averroes and the Interpretation of the Qur'an: Common Sense and Philosophy in Islam by Avital Wohlman (Hebrew University of Jerusalem, Israel)

This book examines the contrasting interpretations of Islam and the Qur'an by Averroes and Al-Ghazali, as a way of helping us untangle current impasses affecting each Abrahamic faith. This has traditionally been portrayed as a battle between philosophy and theology, but the book shows that Averroes was rather more religious and Al-Ghazali more philosophical than they are usually portrayed.

The book traces the interaction between two Muslim thinkers, showing how each is convinced of the existence of a Book in which God is revealed to rational beings, to whom He has given commandments, as well as of the excellence of Islamic society. Yet they differ regarding the proper way to interpret the sacred Book. From this point of view, their discussion does not address the contrast between philosophy and religion, or that between reason and revelation that is so characteristic of the Middle Ages, but rather explores differences at the heart of philosophical discussion in our day: is there a level of discourse which will facilitate mutual comprehension among persons, allowing them to engage in debate?

This interpretation of sacred texts illustrates the ways religious practice can shape believers' readings of their sacred texts, and how philosophical interpretations can be modified by religious practice. Moreover, since this sort of inquiry characterizes each Abrahamic tradition, this study can be expected to enhance interfaith conversation and explore religious ways to enhance tolerance between other believers.

Avital Wohlman is Senior Lecturer in Philosophy at the Hebrew University of Jerusalem, exploring Scottus Eriugena, comparing Maimonides and Thomas Aquinas (1988, 1995), and now contrasting Ibn Rushd [Averroes) with al-Ghazali. David Burrell is currently Professor of Ethics and Development at Uganda Martyrs University, and Hesburgh Professor Emeritus at University of Notre Dame, USA. He has compared Aquinas, Maimonides, and Avicenna; translated key works of al-Ghazali, and explored philosophical dimensions of human and divine freedom in the Abrahamic faiths.

Introduction 1. Journeys of Ghazali and Averroes to their Diverse Conceptions of the Role of Reason 2. From the Chimera of Philosophy to the Evidence of "The Just Balance" 3. The Decisive Criterion of the Distinction Between Islam and Hypocrisy (Zandaqa) 4. Averroes, Philospher-Reader of The Precious Book 5. Reorganization of the World According to Aristotle in the Light of Qur'anic Revelation by Averroes 6. Ghazali and Averroes in Muslim Society. Conclusion

NLS9780415852593
9780415852593
0415852595
Al-Ghazali, Averroes and the Interpretation of the Qur'an: Common Sense and Philosophy in Islam by Avital Wohlman (Hebrew University of Jerusalem, Israel)
Avital Wohlman (Hebrew University of Jerusalem, Israel)
Culture and Civilization in the Middle East
New
Paperback
Taylor & Francis Ltd
2013-08-07
130
N/A
Book picture is for illustrative purposes only, actual binding, cover or edition may vary.
This is a new book - be the first to read this copy. With untouched pages and a perfect binding, your brand new copy is ready to be opened for the first time
Trustpilot