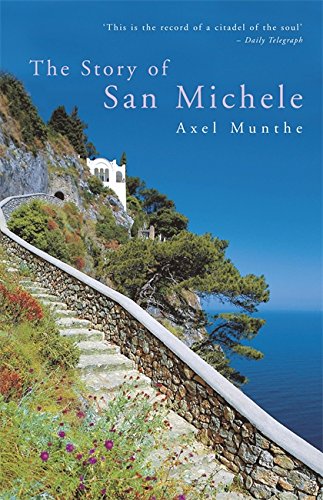 The Story of San Michele
by Axel Munthe

Used Price
$22.49
inc. GST
Free Shipping in Australia
The extraordinary and enduring memoir of Axel Munthe, a travel bestseller since first published in 1929, captures the spirit and feel of an era
Very Good Good

The Story of San Michele Summary

The Story of San Michele by Axel Munthe

This 'dream-laden and spooked' (Marina Warner, London Review of Books) story is to many one of the best-loved books of the twentieth century.

Munthe spent many years working as a doctor in Southern Italy, labouring unstintingly during typhus, cholera and earthquake disasters. It was during this period that he came across the ruined Tiberian villa of San Michele, perched high above the glittering Bay of Naples on Capri. With the help of Mastro Nicola and his three sons, and with only a charcoal sketch roughly drawn on a garden wall to guide them, Munthe devoted himself to rebuilding the house and chapel. Over five long summers they toiled under a sapphire-blue sky, their mad-cap project leading them to buried skeletons and ancient coins, and to hilarious encounters with a rich cast of vividly-drawn villagers.

The Story of San Michele reverberates with the mesmerising hum of a long, hot Italian summer. Peopled with unforgettable characters, it is as brilliantly enjoyable and readable today as it was upon first publication. The book quickly became an international bestseller and has now been translated into more than 30 languages; it is today an established classic, and sales number in the millions.

The Story of San Michele Reviews

One of the most fascinating of books, wise in its appraisal of men, overflowing with humour and edged with irony, sharper than a surgeon's knife. There are chapters which are veritable de Maupassant plots in their concise and dramatic realism. * New York Herald Tribune *
Told with a power and an honesty which makes this a very remarkable document. * TLS *
The Story of San Michele has style, wit, humour, great knowledge of the world, mixed with that strange simplicity of mind that is often the attribute of genius. * Observer *
Romantic, realistic, pitiful and enchanting, this is the record of a citadel of the soul ... all fantasy does it seem? Impossible? Absurd? But San Michele stands there on the hill for witness. A miracle? Well, every work of art is a miracle, and every beautiful thing the shrine of a realized dream. * Daily Telegraph *
A most interesting and lovable revelation, enchantingly described. * Punch *
I have found Dr Munthe's reminiscences intensely interesting and enjoyable, and it is hard to convey their charm of mingled pathos and humour or their multiplicity of appeal. * Illustrated London News *
It is an amazing book: wonderfully beautiful at times, appallingly horrible at others. For horrors he rivals Poe, recounting his gruesome experiences with a quiet simplicity which is strikingly effective. * Western Mail *
'A beautifully written series of episodes from Paris to Capri, ...recounting the author's struggle to discover what he desires from life.' - Matthew Linnecar * Geographical *
There is enough material here to furnish the writers of sensational short stories with plots for the rest of their lives. * Daily News *

Born in Sweden in 1857, Axel Munthe trained to be a doctor in Paris at a precociously early age, establishing a fashionable practice (Maupassant and Strindberg were his patients) and quickly gaining an international reputation. He became the friend of royalty; Tsar Nicholas asked him to look after his son - Rasputin was their second choice.

GOR001255692
The Story of San Michele by Axel Munthe
Axel Munthe
Used - Very Good
Paperback
Hodder & Stoughton General Division
2004-11-08
368
0719566991
9780719566998
N/A
Book picture is for illustrative purposes only, actual binding, cover or edition may vary.
This is a used book - there is no escaping the fact it has been read by someone else and it will show signs of wear and previous use. Overall we expect it to be in very good condition, but if you are not entirely satisfied please get in touch with us.