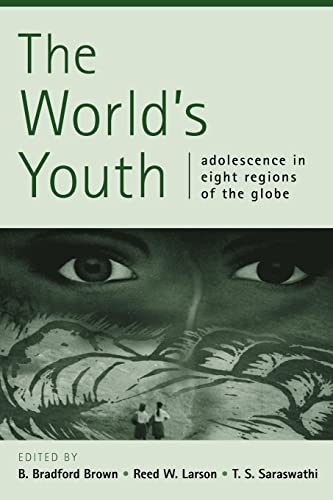 The World's Youth
by B. Bradford Brown

Used Price
$22.99
inc. GST
Free Shipping in Australia
This 2002 book provides descriptions of adolescence in eight regions of the world. Most people, including scholars, base their ideas about this age period on knowledge of American and European 'teenagers'. From Japan to Latin America, this book shows that this particular stage of life is unique in different societies.
Very Good

The World's Youth: Adolescence in Eight Regions of the Globe by B. Bradford Brown

The life stage of adolescence now occurs in most corners of the world, but it takes different forms in different regions. Peers, with such a central role in Western adolescence, play a comparatively minor role in the lives of Arabic and South Asian adolescents. Emotional turmoil and individuation from family occur in some societies but not others. Adolescent sexual revolutions are sweeping through Japan and Latin America. In this 2002 book, scholars from eight regions of the world describe the distinct nature of adolescence in their regions. They draw on research to address standard topics regarding this age - family and peer relationships, schooling, preparation for work, physical and mental health - and show how these have a different cast across societies. As a whole, the book depicts how rapid global change is dramatically altering the experience of the adolescent transition, creating opportunities and challenges for adolescents, parents, teachers, and concerned others.

'The book emphasizes the importance of using culturally appropriate research methods when researching human development. the goal of promoting understanding of adolescence in a global context is well met. The book will enrich several disciplines, some of which include human development, anthropology and cross-cultural studies.' Journal of Adolescence
'... the book is a mine of information ... the common structure for each chapter is immensely helpful for readers to compare and contrast as they work through material from eight different 'regions'. Youth & Policy
'In my opinion, this book should be included in the readings of every researcher and student interested in adolescent development.' International Journal of Behavioural Development
'... a welcome contribution towards highlighting the need to study this vital segment of the population. it will prove of help to many professionals working in the mental health field including psychologists, social workers and health planners. It will also benefit educationalists, human resource and community developers as well as those involved in the current cultural and political discourse.' European Child & Adolescent Psychiatry
"... fascinating ... well-researched." Childhood Education
"It provides a solid review of the situation of adolescents across regions ... The authors cover a range of important topics that are often neglected in studies of adolescents, particularly in the literature concerning developing countries." Studies in Family Planning
"Recommended." Choice

GOR002926061
The World's Youth: Adolescence in Eight Regions of the Globe by B. Bradford Brown
B. Bradford Brown
Used - Very Good
Paperback
Cambridge University Press
2002-10-10
382
0521006058
9780521006057
N/A
Book picture is for illustrative purposes only, actual binding, cover or edition may vary.
This is a used book - there is no escaping the fact it has been read by someone else and it will show signs of wear and previous use. Overall we expect it to be in very good condition, but if you are not entirely satisfied please get in touch with us.