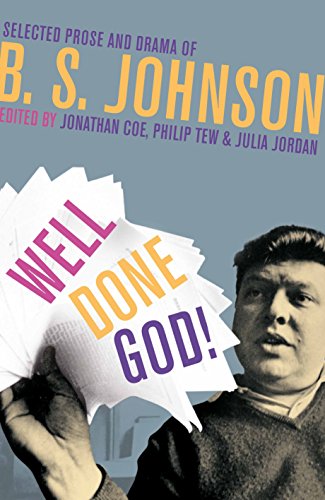 Used Price
$30.99
inc. GST
Free Shipping in Australia
A selection of B S Johnson's prose, collected for the first time, to celebrate the 80th anniversary of his birth.
Very Good

To commemorate the eightieth anniversary of his birth, two of the foremost scholars of B S Johnson, Professor Philip Tew and Dr Julia Jordan, have joined forces with Jonathan Coe, author of the prize-winning biography, Like a Fiery Elephant, to offer a selection of his greatest uncollected or unavailable writing. Well Done God! includes his major prose work, Aren't You Rather Young to be Writing Your Memoirs?, six plays and a selection of his remarkable journalism.

B S Johnson is a truly unique British writer, a cult figure whose original and experimental fiction has, since his tragically early death in 1973, been rediscovered by many subsequent generations of writers and readers. In many ways the heir to Joyce and Beckett, Johnson played with form and narrative across many genres: novels, plays, poetry and memoir.

The future of the novel depends on people like B. S. Johnson -- Anthony Burgess
Experimentalist or not, B. S. Johnson is one of the most original, gifted and readable writers this country has produced in the last fifty years -- Jonathan Coe
A most gifted writer -- Samuel Beckett

About B. S. Johnson

B. S. Johnson (1933-1973), an admirer of Joyce and Beckett, was a novelist whose works combine verbal inventiveness with typographical innovations. His books include Albert Angelo, Trawl, The Unfortunates and House Mother Normal.

Jonathan Coe's biography of B. S. Johnson, Like a Fiery Elephant, won the Samuel Johnson Prize for non-fiction in 2005. He is also the author of nine novels, including What a Carve Up!, The Rotters' Club and The Rain Before It Falls.

Philip Tew is Professor in English (Post-1900 Literature) and Deputy Head for Research of the School of Arts at Brunel University, a fellow of the Royal Society of Arts, and a member of the Royal Society of Literature. Among his main publications are B. S. Johnson: A Critical Reading, The Contemporary British Novel, Jim Crace and co-edited with Glyn White Re-reading B. S. Johnson. Tew is the founding Director of both the Modern & Contemporary Fiction Studies Network and the B.S. Johnson Society; he is also currently Director of the Brunel Centre for Contemporary Writing. More recent books have included Re-Envisioning the Pastoral co-edited with David James; Zadie Smith; and a multi-authored policy report on ageing, Coming of Age.

Julia Jordan is Lecturer in Twentieth-Century Literature at Cardiff University. She is the author of Chance and the Modern British Novel.

GOR007762648
Well Done God!: Selected Prose and Drama of B. S. Johnson by B. S. Johnson
B. S. Johnson
Used - Very Good
Hardback
Pan Macmillan
2013-02-14
496
1447227107
9781447227106
N/A
Book picture is for illustrative purposes only, actual binding, cover or edition may vary.
This is a used book - there is no escaping the fact it has been read by someone else and it will show signs of wear and previous use. Overall we expect it to be in very good condition, but if you are not entirely satisfied please get in touch with us.