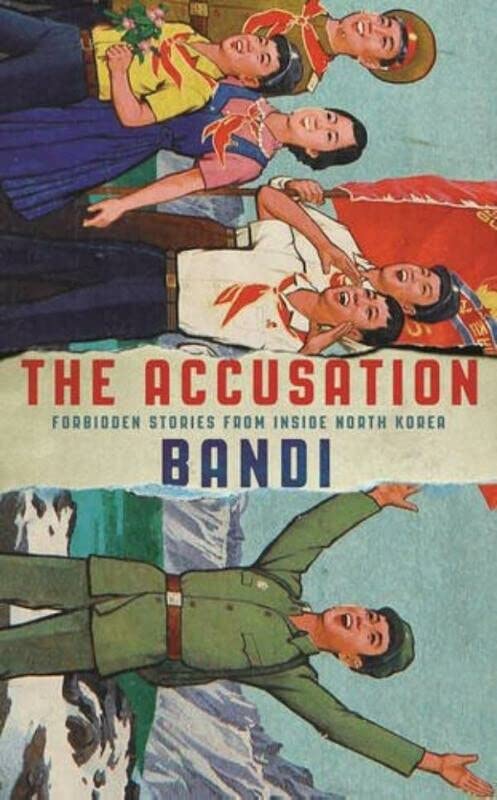 The Accusation
by Bandi

The Accusation: Forbidden Stories From Inside North Korea by Bandi

'Dear President Trump ... As you are interested in North Korea, you will surely be interested in this book.' - Margaret Atwood on The Accusation In 1989, a North Korean dissident writer, known to us only by the pseudonym Bandi, began to write a series of stories about life under Kim Il-sung's totalitarian regime. Smuggled out of North Korea and set for publication around the world in 2017, The Accusation provides a unique and shocking window on this most secretive of countries. Bandi's profound, deeply moving, vividly characterised stories tell of ordinary men and women facing the terrible absurdity of daily life in North Korea: a factory supervisor caught between loyalty to an old friend and loyalty to the Party; a woman struggling to feed her husband through the great famine; the staunch Party man whose actor son reveals to him the absurd theatre of their reality; the mother raising her child in a world where the all-pervasive propaganda is the very stuff of childhood nightmare. The Accusation is a heartbreaking portrayal of the realities of life in North Korea. It is also a reminder that humanity can sustain hope even in the most desperate of circumstances - and that the courage of free thought has a power far beyond those seek to suppress it.

A must-read! The first book of fiction to come out of North Korea. (Smuggled.) Fascinating and chilling. Heartfelt and heartbreaking. -- Margaret Atwood
If poetry, as Wordsworth said, can be glossed as powerful emotion recollected in tranquillity, The Accusation reads like powerful emotion felt right now, in a condition of ongoing crisis ... In its scope and courage, The Accusation is an act of great love. -- RO Rwon * Guardian *
An extraordinary story of people in North Korea ... highly readable, nuanced and credible -- Stephen Evans, BBC South Korea Correspondent * BBC World Service *
What's especially satisfying about this collection is that its worth goes well beyond the political or historical. Without melodrama or hyperbole, Bandi places us in a parallel universe of oppressive ritual, military-style code words and bizarre restrictions ... it reads like an Orwellian dystopia, Bandi tears at the heart with simple illustrations of the tenderness between husband and wife, parent and child, and a people who gaze at the larks swooping and soaring above them and marvel at their freedom. -- Jane Graham * The Big Issue *
A collection of courageous and confounding short stories ... It's a quiet privilege to be given access to the voiceless by listening to such vivid and uncompromised storytelling ... this collection of stories seems both a flickering light in North Korea's darkness and an unintentional reminder that it is getting darker here, too. -- Fiona Walsh * New Statesman *
Revealing the terrible truth of living in a country where any freedoms are curtailed, where famine and brutality are rife, but where human belief and hope can survive any odds, this is a defining read for 2017. * Emerald Street *
The Solzhenitsyn of Pyongyang ... A luminous testimony, crammed with irony, on the insane regime of Kim Il-Sung and the hopelessness of the citizens of North Korea * L'Express *
Even if one did not know anything about the writer or the way the manuscript was smuggled out of the country, it would not diminish the fact that the force of this collection of novellas evokes the classics of world literature about totalitarianism * L'ours *
The Accusation makes a lot of contemporary fiction seem tame and self-indulgent. This truly remarkable book comes from a writer writing at the risk of their own life. The result may well be the most important work of fiction published this year. * The Australian *
how Bandi's collection was smuggled out of the country reveals just how miraculous it is that it exists at all * Publisher's Weekly *
an important document of witness * Kirkus Reviews *

Bandi is the Korean word for firefly. It is the pseudonym of an anonymous dissident writer still living in North Korea.

GOR008227647
The Accusation: Forbidden Stories From Inside North Korea by Bandi
Bandi
Used - Very Good
Hardback
Profile Books Ltd
2017-03-02
256
178125754X
9781781257548
N/A
Book picture is for illustrative purposes only, actual binding, cover or edition may vary.
This is a used book - there is no escaping the fact it has been read by someone else and it will show signs of wear and previous use. Overall we expect it to be in very good condition, but if you are not entirely satisfied please get in touch with us.