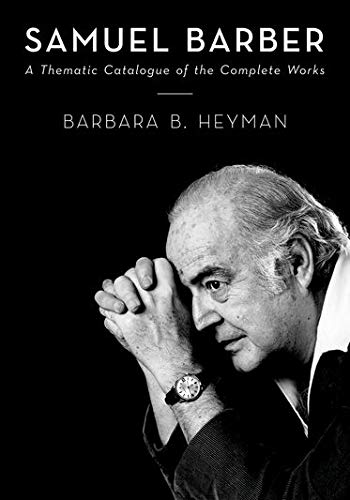 Samuel Barber
by Barbara B. Heyman

Samuel Barber: A Thematic Catalogue of the Complete Works by Barbara B. Heyman

Samuel Barber: A Thematic Catalogue of the Complete Works is the first publication to list the entire musical output of one of the most beloved and frequently performed American composers. In this exhaustive study, renowned Barber biographer Barbara Heyman chronologically lists and details more than 100 published and nearly twice as many unpublished works - some until now unknown. Each entry includes information about first performances, commissions, and the circumstances and inspiration of the composition; the texts of songs; a musical extract containing the opening measures of each work, movement, or major aria; duration, revisions, editions, arrangements, and a select discography of historical and contemporary performances. The descriptions of manuscript sources provide details about the hundreds of holograph manuscripts, sketches, drafts, and significant publisher's proofs with Barber's corrections. Entries are enhanced by Heyman's extensive commentary, which draws from Barber's correspondence, interviews, and diaries. Useful appendices to the catalogue comprise a register of works by genre; an alphabetical directory of works; an index of first lines of vocal works; a listing by nationality of authors and translators of texts set by Barber; and a comprehensive discography. This thematic catalogue is an invaluable guide for musicians, scholars, and students, providing an essential foundation for any serious study of Barber and his music.

this new book serves as a model for thematic catalogs of dominant 20th-century composers. * R. Hartsock, CHOICE *
The key strength of this ambitious book is Langhamers ability to skilfully trace a number of complex emotional shifts decade by decade across her chosen time period. * Dr Sally Holloway, Reviews in History, *

About Barbara B. Heyman

Barbara B. Heyman, musicologist and editor, has written and lectured extensively about Samuel Barber. Her book Samuel Barber: The Composer and His Music (Oxford University Press, 1992, 1994) won the ASCAP-Deems Taylor Award and is considered the definitive biography of the composer.

GOR010867624
Samuel Barber: A Thematic Catalogue of the Complete Works by Barbara B. Heyman
Barbara B. Heyman
Used - Very Good
Hardback
Oxford University Press Inc
2011-02-09
608
0199744645
9780199744640
N/A
Book picture is for illustrative purposes only, actual binding, cover or edition may vary.
This is a used book - there is no escaping the fact it has been read by someone else and it will show signs of wear and previous use. Overall we expect it to be in very good condition, but if you are not entirely satisfied please get in touch with us.