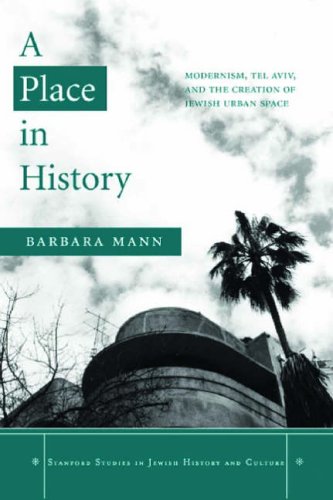 A Place in History
by Barbara E. Mann

Out of Stock
$49.99
inc. GST
A Place in History is a cultural study of Tel Aviv, Israel's population center and one of the original settlements, established in 1909. The book describes how a largely European Jewish immigrant society attempted to forge a home in the Mediterranean, and explores the difficulties and challenges of this endeavor.
Very Good
Only 0 left

A Place in History Summary

A Place in History: Modernism, Tel Aviv, and the Creation of Jewish Urban Space by Barbara E. Mann

A Place in History is a cultural study of Tel Aviv, Israel's population center, established in 1909. It describes how a largely European Jewish immigrant society attempted to forge a home in the Mediterranean, and explores the role of memory and diaspora in the creation of a new national culture. Each chapter is devoted to a particular place in the city that has been central to its history, and includes literary, artistic, journalistic, and photographic material relating to that site.

This is the first book-length study of Tel Aviv in English. It will appeal to readers interested in urban cultures, the contemporary Middle East, modern Jewish history, and Israeli literature. It also contributes to the ongoing public debate about memory, memorials and urban identity.

A Place in History Reviews

"A Place in History is an important contribution to the growing body of knowledge about Israeli public space in general and urban space in particular... Highly recommended to those who seek a theoretical perspective on Israeli urbanism, or are interested in its ideological roots or its spatial transformations. Though the book focuses on Tel Aviv, in many ways it conveys the broader story of Israeli territorialization. Mann's book could also serve visitors as an excellent critical guide to the city's modern geography and history." -- H-Net Reviews
"A very important contribution, this book adds a crucial layer to the discussion of the city of Tel Aviv in its local, national, and historical context. I would even venture to claim that it offers the most complex and multi-layered view to date, a Renaissance text in which the author/flaneuse strolls, researches, interprets, writes, and even makes photographs, all at the same time." -- Hebrew Studies
"While her love for Tel Aviv is palpable, Mann maintains a critical distance from her subject, which assures A Place in History its own place as an authoritative guide to the complex textualities of Israel's largest urban area." -- Tikkun

Barbara E. Mann is Associate Professor of Hebrew Literature at the Jewish Theological Seminary in New York. She is the co-editor of Prooftexts: A Journal of Jewish Literary History.

Contents @toc4:Acknowledgments iii Preface iii @toc2:1 Jews in Space 000 2 The Zionist Uncanny: Reading the Old Cemetery on Trumpeldor 000 3 Rothschild Boulevard: When a Street Becomes a Monument 000 4 A View from the Balcony: Public and Private Spaces/Public and Private Selves 000 5 The Edge of Town: Depicting the City's Periphery as a Way of Naming Its Center 000 6 Rabin Square, Summayl, and the Rhetoric of Walking 000 @toc4: Appendix: Poems Cited in the Original Hebrew iii Notes iii Index iii

GOR010253277
A Place in History: Modernism, Tel Aviv, and the Creation of Jewish Urban Space by Barbara E. Mann
Barbara E. Mann
Stanford Studies in Jewish History and Culture
Used - Very Good
Paperback
Stanford University Press
2006-03-25
336
080475019X
9780804750196
N/A
Book picture is for illustrative purposes only, actual binding, cover or edition may vary.
This is a used book - there is no escaping the fact it has been read by someone else and it will show signs of wear and previous use. Overall we expect it to be in very good condition, but if you are not entirely satisfied please get in touch with us.