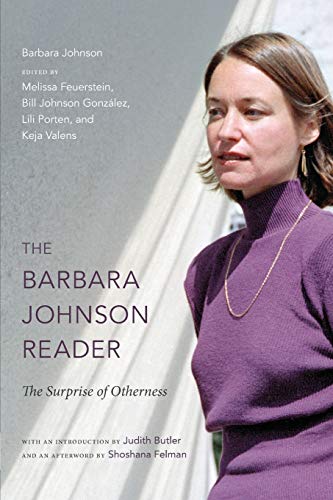 Offers a historical guide through the metamorphoses and tumultuous debates that have defined literary study in recent decades, as viewed by one of critical theory's most astute thinkers.

This Reader collects in a single volume some of the most influential essays written by Barbara Johnson over the course of her thirty-year career as a pioneering literary theorist and cultural critic. Johnson achieved renown early in her career, both as a brilliant student of the Yale School of literary criticism and as the translator of Jacques Derrida's Dissemination. She went on to lead the way in extending the insights of structuralism and poststructuralism into newly emerging fields now central to literary studies, fields such as gender studies, African American studies, queer theory, and law and literature. Stunning models of critical reading and writing, her essays cultivate rigorous questioning of universalizing assumptions, respect for otherness and difference, and an appreciation of ambiguity.

Along with the classic essays that established her place in literary scholarship, this Reader makes available a selection of Johnson's later essays, brilliantly lucid and politically trenchant works exploring multilingualism and translation, materiality, ethics, subjectivity, and sexuality. The Barbara Johnson Reader offers a historical guide through the metamorphoses and tumultuous debates that have defined literary study in recent decades, as viewed by one of critical theory's most astute thinkers.
"Johnson's real gift was to tackle the 'dead white males' of the canon and re-read them, looking for the women, ever alert to what she called 'muteness envy' in canonical poetry. She directed her attention to popular works, too, to films such as Thelma and Louise and The Piano, happy to bring Keats into the discussion as she did so. Such essays stress critical and creative vitality in the midst of death, and are still life-giving today, still radical, angry and passionate, yet always disciplined. Johnson asks acute questions, inserts the personal into her academic essays, and gives us new ideas about 'how to read.'" -- Lesley McDowell * TLS *
"Reading these essays, one finds them as sprightly, brilliant, and revelatory as ever. Johnson's style-famous for the clarity that paradoxically masks and illuminates the argumentative complexity of the writing-is brisk, orderly, and economical. ... Perhaps this is the moment to return to the intellectual upheaval of deconstruction, that almost forgotten art of reading and rereading. There is no better place to begin rereading than right here, with Barbara Johnson's own startling and writerly prose." -- Judith Brown * Modernism/modernity *
"Essays on abortion, corporate personhood, and many other still contemporary issues show that, for Johnson, deconstruction was always deeply intertwined with lived political reality, and many of the best essays in the collection bridge the gap between readings of poems and analysis of life in various forms of political relation, often in the context of the surprising strangeness of the textual or human encounter. For Johnson, 'the undecidable is the political. There is politics precisely because there is undecidability. And there is also poetry' (p.227). The forms of her own essays, intriguing in the turns they take, the conclusions they draw, and the interpretations they bring forth from the texts they examine, highlight and perform this causal relationship in consistently insightful and surprising ways." * Forum for Modern Language Studies *

Melissa Feuerstein is a Research Associate at the Davis Center at Harvard University.

Lili Porten has taught in the writing programs at Harvard, Boston University, and Boston College.

Acknowledgments vii Editors' Preface xi Personhood and Other Objects: The Figural Dispute with Philosophy / Judith Butler xvii Barbara Johnson by Barbara Johnson xxvii Part I. Reading Theory as Literature, Literature as Theory 1. The Critical Difference: BartheS/BalZac 3 2. Translator's Introduction to Dissemination (abridged) 14 3. Poetry and Syntax: What the Gypsy Knew 26 4. A Hound, a Bay Horse, and a Turtle Dove: Obscurity in Walden 36 5. Strange Fits: Poe and Wordsworth on the Nature of Poetic Language 44 6. The Frame of Reference: Poe, Lacan, Derrida 57 Part II. Race, Sexuality, Gender 7. Euphemism, Understatement, and the Passive Voice: A Geneaology of Afro-American Poetry 101 8. Metaphor, Metonymy, and Voice in Their Eyes Were Watching God 108 9. Moses and Intertextuality: Sigmund Freud, Zora Neale Hurston, and the Bible 126 10. Lesbian Spectacles: Reading Sula,
NGR9780822354192
9780822354192
0822354195
The Barbara Johnson Reader: The Surprise of Otherness by Barbara Johnson
Barbara Johnson
A John Hope Franklin Center Book
New
Paperback
Duke University Press
2014-05-30
488
N/A
Book picture is for illustrative purposes only, actual binding, cover or edition may vary.
This is a new book - be the first to read this copy. With untouched pages and a perfect binding, your brand new copy is ready to be opened for the first time
Trustpilot