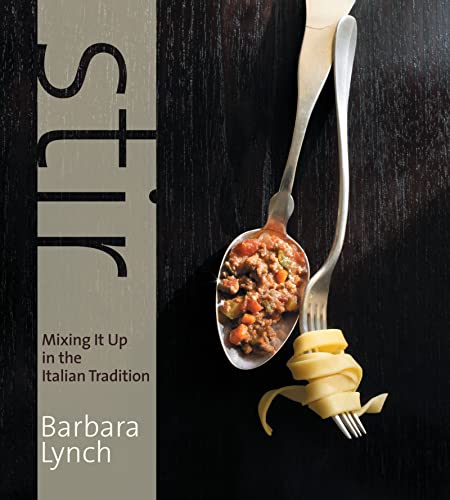 Stir: Mixing it Up in the Italian Tradition by Barbara Lynch

Although Barbara Lynch was born and raised in South Boston, not Tuscany, many critics believe her food rivals the best of Italy. It has been praised by Bon Appetit, Food & Wine, and Gourmet, and many more. Lynch's cuisine is all the more remarkable because it is self-taught. In a story straight out of Good Will Hunting, she grew up in the turbulent projects of 'Southie', where petty crime was the only viable way to make a living. But in a home ec class in high school, she discovered her passion. Through a mix of hunger for knowledge, hard work, and raw smarts, she gradually created her own distinctive style of cooking, mining Italian and French classics for ideas and seasoning them with imagination. The 150 recipes in "Stir" combine sophistication with practicality. Appetizers like baked tomatoes and cheese and crisp, buttery brioche pizzas. Dozens of the artful pastas Lynch is famous for, such as little lasagnas with chicken meatballs, and potato gnocchi with peas and mushrooms. Lobster rolls with aioli. Chicken wrapped in prosciutto and stuffed with melting Italian cheese. Creamy vanilla bread pudding with caramel sauce. Accompanied by Lynch's forthright opinions and stunning four-color photographs, these dishes will create a stir on home tables.

"Well worth the wait"
-- Tom Colicchio

"The core of Stir is the story of a woman who saved herself from a dead-end life with the power of cooking. Any chef who goes from stealing buses to creating some of the best food on the eastern seaboard is someone I always want to hear from. Distinctive dishes, generous spirit, and a genuine cook are all bound up in this wonderful book."
-- Michael Ruhlman, author, Ratio

"In the American culinary stratosphere, Barb Lynch stands out as a national treasure. Stir gives the home chef her cooking keys and secrets to the kitchen kingdom."
-- Art Smith, James Beard Award-winning chef and best-selling author

"To look inside this book is akin to looking into the soul of one of America's greatest chefs. Though Barbara Lynch's food is contemporary and smart, it's refreshing to see that her cuisine is remarkably grounded. There is so much of this that I can't wait to cook"
-- John Besh, Chef/Owner Besh Restaurant Group, New Orleans

"Honest and straightforward, Stir will be your new best friend in the kitchen."
-- Nancy Oakes, chef-owner, Boulevard

"I didn't think it would be possible to capture all that is bold, brash, ballsy, and Bostonian about Barbara Lynch on paper but somehow she has done it! I love this book!"
--Suzanne Goin, chef-owner Luques

"Barbara Lynch's first cookbook was well worth the wait. Her grit, drive, and signature good humor shine through in this collection of elegant, user-friendly recipes."
-- Tom Colicchio, Chef-Owner of The Craft Restaurants

"[Lynch] has mastered her art, and the results are evident in this gorgeous, mouth-watering book..."
--Publishers Weekly

"At long last, Barbara Lynch ... has written the cookbook her admirers have been waiting for. Her contemporary French/Italian food is refined but approachable." --Fine Cooking

GOR006305124
Stir: Mixing it Up in the Italian Tradition by Barbara Lynch
Barbara Lynch
Used - Very Good
Hardback
Houghton Mifflin
2009-11-26
352
0618576819
9780618576814
N/A
Book picture is for illustrative purposes only, actual binding, cover or edition may vary.
This is a used book - there is no escaping the fact it has been read by someone else and it will show signs of wear and previous use. Overall we expect it to be in very good condition, but if you are not entirely satisfied please get in touch with us.