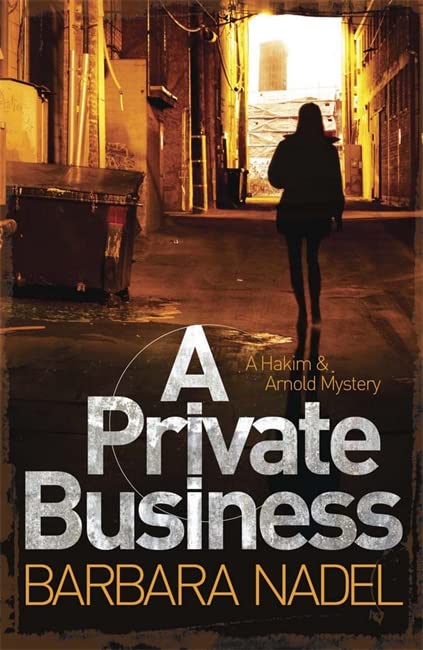 A Private Business
by Barbara Nadel

A Private Business: A Hakim and Arnold Mystery by Barbara Nadel

2012: London is hosting the Olympics and the East End is at the centre of the world. Yet surrounding the glamorous Olympic Park are some of the most deprived areas of the city. PI Lee Arnold and his assistant, Mumtaz Hakim, work in these streets, in a community fraught with tensions. When Arnold is hired by a controversial stand- up comedian, he already knows that her routine could make her a target. Arnold and Hakim's new client is being followed. Are her fears justified? As they delve deeper, they discover that this investigation is more complex and sinister than a simple, straightforward case of stalking.

'a compelling new series' Sunday Telegraph. * Sunday Telegraph *
'a despairing look at the underbelly of London but it has the ring of truth' Independent. * Independent *
'A gutsy tale well-grounded in local colour' The Times. * The Times *
'a new and original pair of detectives in poverty-stricken Stratford East ... This despairing look at the underbelly of London has a ring of truth' Belfast Telegraph. * Belfast Telegraph *
'an enjoyable novel ... I look forward to the second Hakim and Arnold mystery already' Shotsmag. * Shotsmag *
'Another Nadel winner' Crimesquad. * Crimesquad *
'Barbara Nadel weaves an intricate story around the lives of ordinary people and the devastation that is caused when people are not what they seem ... A good read, very enjoyable' Eurocrime. * Eurocrime *
'Bleak, brutal and timely' Financial Times. * Financial Times *
'Typical Barbara Nadel fare, rich in quirky plotting' Good Book Guide. * Good Book Guide *

In addition to her Hakim and Arnold crime series set in east London, Barbara Nadel is the author of the Ikmen crime novels, set in Turkey. Born in London's East End, Barbara now lives in Essex.

GOR006469302
A Private Business: A Hakim and Arnold Mystery by Barbara Nadel
Barbara Nadel
Used - Good
Paperback
Quercus Publishing
2012-07-01
320
085738774X
9780857387745
N/A
Book picture is for illustrative purposes only, actual binding, cover or edition may vary.
The book has been read but remains in clean condition. All pages are intact and the cover is intact. Some minor wear to the spine.