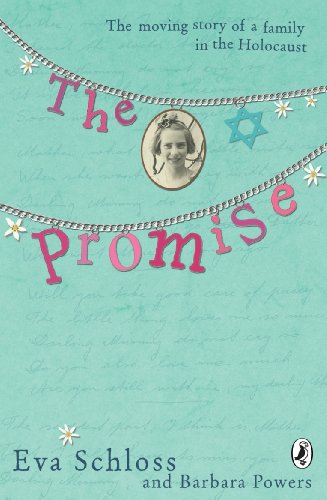 The Promise
by Barbara Powers

In Stock
$14.49
+10% GST
A true story of a young Jewish girl and her brother growing up during the Second World War, caught in a world turned upside down by the Nazis. It is intended for children.
Very Good Good
7 in stock

The Promise: The Moving Story of a Family in the Holocaust by Barbara Powers

This is the remarkable true story of a young Jewish girl and her brother growing up during the Second World War, caught in a world turned upside down by the Nazis. Written specially for children, Eva describes her happy early childhood in Vienna with her kind and loving parents and her older brother Heinz, whom she adored. But when the Nazis marched into Austria everything changed. Eva's family fled to Belgium, then to Amsterdam where, with the help of the Dutch Resistance, they spent the next two years in hiding - Eva and her mother in one house, and her father and brother in another. Finally, though, they were all betrayed and deported to Auschwitz concentration camp in Poland. Despite the horrors of the camp, Eva's positive attitude and stubborn personality (which had often got her into trouble) saw her through one of the most tragic events in history and she and her mother eventually returned to Amsterdam. Sadly her father and brother perished just weeks before the liberation. Eva and her mother went back to the house where Heinz and his father had hidden, for Eva had remembered that Heinz had told her he had hidden his paintings beneath the floorboards there. Sure enough, there were over thirty beautiful paintings. Heinz hadn't wasted any of his talents during his captivity. For Eva, here was a tangible, everlasting memory of her brother and a reminder of her father's promise that all the good things you accomplish will make a difference to someone, and your achievements will be carried on. Heinz's paintings have been on display in exhibitions in the USA and are now a part of a permanent exhibition in Amsterdam's war museum.
Told simply and clearly for younger readers, THE PROMISE is an unforgettable story, written by Eva Schloss, the step-daughter of Otto Frank and Barbara Powers, Eva's very close friend.

Eva Schloss lives in North London and has been married to Zvi for over fifty years. They have three grown-up daughters and five grandchildren. Eva regularly visits schools, universities and other institutions to talk about her experiences during the Holocaust. A play, 'And Then They Came for Me: Remembering the World of Anne Frank' by James Still deals with the lives of Eva and her posthumous step-sister, Anne Frank and other teenagers in the Holocaust. It has been performed all over the USA and in many other countries including a performance by children and young people in London in 2005 to mark the liberation of Auschwitz.

Eva is a trustee of the Anne Frank Trust in London.

GOR001403970
The Promise: The Moving Story of a Family in the Holocaust by Barbara Powers
Barbara Powers
Used - Very Good
Paperback
Penguin Books Ltd
2006-04-06
160
0141320818
9780141320816
N/A
Book picture is for illustrative purposes only, actual binding, cover or edition may vary.
This is a used book - there is no escaping the fact it has been read by someone else and it will show signs of wear and previous use. Overall we expect it to be in very good condition, but if you are not entirely satisfied please get in touch with us.