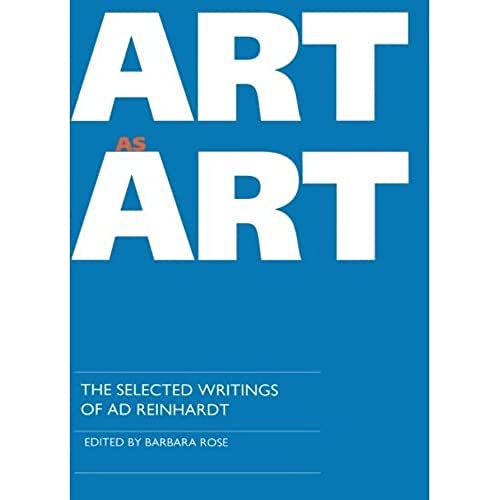 Art as Art
by Barbara Rose

Art as Art: The Selected Writings of Ad Reinhardt by Barbara Rose

Ad Reinhardt is probably best known for his black paintings, which aroused as much controversy as admiration in the American art world when they were first exhibited in the 1950s. Although his ideas about art and life were often at odds with those of his contemporaries, they prefigured the ascendance of minimalism. Reinhardt's interest in the Orient and in religion, his strong convictions about the value of abstraction, and his disgust with the commercialism of the art world are as fresh and valid today as they were when he first expressed them.

Barbara Rose is the author of books on Joan Miro, Claes Oldenburg, Lee Krasner, and Ellsworth Kelly and has twice received the College Art Association's Mather Award for distinguished criticism.

I. Reinhardt on Reinhardt
Editor's Note
Chronology (1966)
A Contribution to a Journal of Some Future Art Historian (1958)
Five Stages of Reinhardt's Timeless Stylistic Art-Historical Cycle
(1965)
Reinhardt Paints a Picture (1965)
An Interview with Ad Reinhardt (1966-1967)
Monologue (1970)

GOR003869971
Art as Art: The Selected Writings of Ad Reinhardt by Barbara Rose
Barbara Rose
Documents of Twentieth-Century Art
Used - Very Good
Paperback
University of California Press
1992-07-01
253
0520076702
9780520076709
N/A
Book picture is for illustrative purposes only, actual binding, cover or edition may vary.
This is a used book - there is no escaping the fact it has been read by someone else and it will show signs of wear and previous use. Overall we expect it to be in very good condition, but if you are not entirely satisfied please get in touch with us.