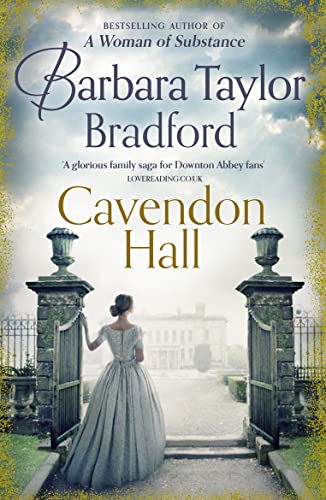 A sweeping saga set around the aristocratic Ingham family of Cavendon Hall and the Swanns who serve them, set on the eve of World War 1.

A sweeping saga set around the aristocratic Ingham family of Cavendon Hall and the Swanns who serve them, set on the eve of World War 1.

Two entwined families: the aristocratic Inghams and the Swanns who serve them. One stately home: Cavendon Hall, a grand imposing house nestled in the beautiful Yorkshire Dales. And a society beauty: Lady Daphne Ingham is the most beautiful of the Earl's daughters, a glittering marriage her destiny.

But in the summer of 1913, a devastating event changes her future forever, and puts the House of Ingham at risk. Life as the families of Cavendon Hall know it - Royal Ascot, supper dances, grouse season feasts - is about to alter beyond recognition as the storm clouds of war gather.

`Barbara Taylor Bradford returns to her roots with this classic saga of loyalty, secrets, passion and intrigue...if you've been suffering withdrawal symptoms from Downton, this is for you' Daily Mail

`A stately home, a dangerous secret and two families whose fates have been intertwined for generations...a gripping period piece set on the brink of the Great War. Exquisite escapism of the highest order' The Lady

`Few novelists are as consummate as Barbara Taylor Bradford at keeping the reader turning the page. She is one of the world's best at spinning yarns'
Guardian

GOR007064136
Cavendon Hall (Cavendon Chronicles, Book 1) by Barbara Taylor Bradford
Barbara Taylor Bradford
Cavendon Chronicles
Used - Like New
Paperback
HarperCollins Publishers
2014-10-20
464
0007503202
9780007503209
N/A
Book picture is for illustrative purposes only, actual binding, cover or edition may vary.
The book has been read, but looks new. The book cover has no visible wear, and the dust jacket is included if applicable. No missing or damaged pages, no tears, possible very minimal creasing, no underlining or highlighting of text, and no writing in the margins.