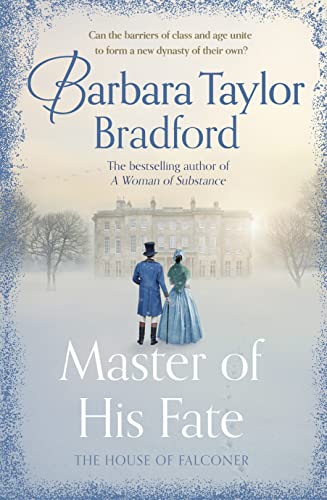 Master of His Fate
by Barbara Taylor Bradford

From Victorian London to the vibrant port cities of England and France, from gracious stately homes in Gloucestershire to the decadence of Paris, Master of his Fate launches an unforgettable new historical series.

Master of His Fate Summary

Master of His Fate by Barbara Taylor Bradford

From Victorian London to the vibrant port cities of England and France, from gracious stately homes in Gloucestershire to the decadence of Paris, Master of his Fate launches an unforgettable new historical series.

London 1884: Queen Victoria is Empress of India and Britain is at its peak of worldwide power.

James Falconer works as a barrow boy in a flourishing London market owned by Henry Malvern. But James hungers for more. Turning away from family tradition, he dreams of building an empire of stores like Fortnum and Mason's and believes that Henry, along with his daughter and heir Alexis, could offer him a way to climb beyond his beginnings.

But tragedy and betrayal threaten the dreams of both James and Alexis - and jeopardise everything they hold dear...

Master of His Fate Reviews

`The first in a new series set in Victorian London, braiding the fates of a self-made charmer with a serious-minded heiress.' Daily Mail

`A tale of fortunes lost, betrayal, revenge and, of course, love' Sun

Acclaim for Barbara Taylor Bradford:
`A stately home, a dangerous secret and two families whose fates have been intertwined for generations...a gripping period piece set on the brink of the Great War. Exquisite escapism of the highest order.' The Lady

Barbara Taylor Bradford was born and raised in England. She started her writing career on the Yorkshire Evening Post and later worked as a journalist in London. Her first novel, A Woman of Substance, became an enduring bestseller and was followed by many more, including the bestselling Harte series. Barbara's books have sold over eighty-five million copies worldwide in more than ninety countries and forty languages, and ten mini-series and television movies have been made of her books. In October of 2007, Barbara was appointed an OBE by the Queen for her services to literature. Master of His Fate is her thirty-third novel.

To find out more and join the huge community of her fans, find Barbara on Facebook, follow her on Twitter @BTBNovelist and keep up to date with her events, novels and tours at www.barbarataylorbradford.co.uk.

GOR009689611
Master of His Fate by Barbara Taylor Bradford
Barbara Taylor Bradford
Used - Very Good
Paperback
HarperCollins Publishers
2018-11-16
400
0008242410
9780008242411
N/A
Book picture is for illustrative purposes only, actual binding, cover or edition may vary.
This is a used book - there is no escaping the fact it has been read by someone else and it will show signs of wear and previous use. Overall we expect it to be in very good condition, but if you are not entirely satisfied please get in touch with us.