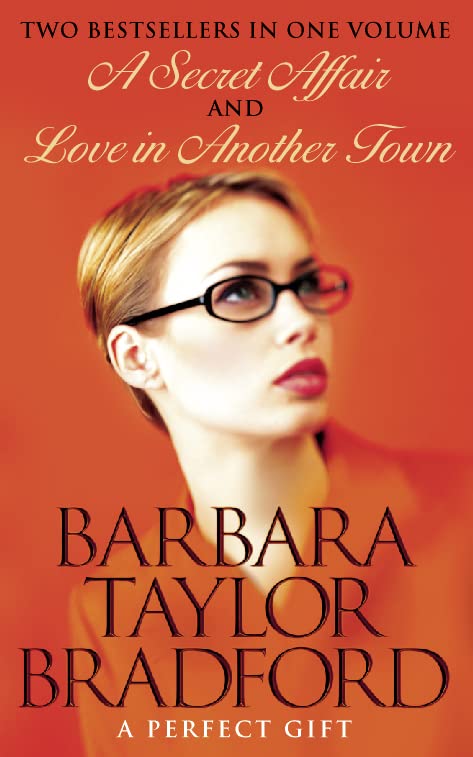 A Secret Affair / Love in Another Town
by Barbara Taylor Bradford

Two novellas together in one volume from the bestselling author of A Woman of Substance.

A Secret Affair / Love in Another Town Summary

A Secret Affair / Love in Another Town by Barbara Taylor Bradford

Two novellas together in one volume from the bestselling author of A Woman of Substance.

A Secret Affair
Bill Fitzgerald is an acclaimed American television foreign correspondent. Exhausted after a long stint in Bosnia, he travels to Venice to meet Francis Xavier Peterson, an old friend. Whilst at the bar of the Gritti Palace Hotel on the Grand Canal with Frankie, Bill is struck by the dark beauty of a young woman seated alone. Vanessa Stewart is a glass designer from New York who is visiting the glass-blowing works in Murano. The three expatriates meet and decide to celebrate Thanksgiving together. And that evening, full of warmth and camaraderie, begins an illicit though fateful love affair.

Love In Another Town
Jake Cantrell is suave, charming and a brilliant electrical engineer saddened by the failure of his marriage to Amy. Maggie Sorrell is a bright and elegant interior designer. She, too, has suffered a broken marriage. In picturesque Kent, Connecticut, Jake and Maggie join a local amateur dramatics group, and are introduced. The relationship blossoms, but ahead lie obstacles - the fifteen-year difference in their ages, Amy's sudden illness, her reluctance to divorce Jake, and Maggie's own inner turmoil. But together they overcome the odds and find the ultimate: love in another town.

Customer Reviews - A Secret Affair / Love in Another Town

A Secret Affair / Love in Another Town Reviews

GOR003131600
A Secret Affair / Love in Another Town by Barbara Taylor Bradford
Barbara Taylor Bradford
Used - Very Good
Paperback
HarperCollins Publishers
2000-03-20
400
0006514847
9780006514848
N/A
Book picture is for illustrative purposes only, actual binding, cover or edition may vary.
This is a used book - there is no escaping the fact it has been read by someone else and it will show signs of wear and previous use. Overall we expect it to be in very good condition, but if you are not entirely satisfied please get in touch with us.