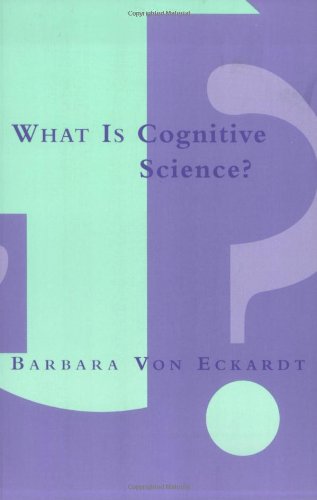 What Is Cognitive Science?
by Barbara Von Eckardt (Dean of Liberal Arts)

Used Price
$49.99
inc. GST
Free Shipping in Australia
In this richly detailed analysis, Barbara Von Eckardt lays the foundations for understanding what it means to be a cognitive scientist. She characterizes the basic assumptions that define the cognitive science approach and systematically sorts out a host of recent and the controversies surrounding them.
Very Good

What Is Cognitive Science? Summary

What Is Cognitive Science? by Barbara Von Eckardt (Dean of Liberal Arts)

In this richly detailed analysis, Barbara Von Eckardt lays the foundations for understanding what it means to be a cognitive scientist. She characterizes the basic assumptions that define the cognitive science approach and systematically sorts out a host of recent and the controversies surrounding them.

The field of cognitive science is now in its third decade, yet the question remains whether this lively and fertile science, which studies the human mind and draws on disciplines as varied as linguistics, artificial intelligence, philosophy, cognitive psychology, and neuroscience, can exist as a coherent intellectual enterprise. In this richly detailed analysis, Barbara Von Eckardt lays the foundations for understanding what it means to be a cognitive scientist. She characterizes the basic assumptions that define the cognitive science approach and systematically sorts out a host of recent issues and controversies surrounding them.

Von Eckardt takes issue with those who (like Howard Gardner in The Mind's New Science) argue that there is no agreed-upon research paradigm and no agreed-upon set of assumptions or methods in cognitive science, and with those who believe that the field should not be so committed. She argues that there is indeed a framework of shared commitments, which includes basic questions that guide research, substantive assumptions that constrain how those questions are to be answered, and methodological assumptions about how to find those answers.

What Is Cognitive Science? Reviews

Computer Music Journal: Music Information Processing This issue of Computer Music Journal contains four full articles related to problems of musical data processing and one about a tuning application using MIDI. There are interesting sections with news from the computer music world, reviews of cd's, publications and events and new product information as well. David Huron of Ohio State University gives an interesting overview of his Humdrum Toolkit, a suite of command-line software tools for processing musical data in predefined or custom representations. The most striking features of Humdrum are its versatility and the fact that it easily communicates with other music software. It also allows scientists and musicians to use their own data representations, which makes it attractive as an addition to the tools they are already acquainted with. For beginning computer users, its command line interface may well be a bit complicated. Brian Pardo and William P. Birmingham from the University of Michigan describe some algorithms for chordal analysis. Any music student will know how difficult it can be to identify chords in classic scores. The task can be described as a two-step process: identifying harmonic 'segments' and labelling the segments with the right chord. The authors have defined metrics to evaluate the performance of their algorithms, thus laying the foundations for further work on improved algorithms. The article certainly will be of interest for those who are using or developing software for teaching harmony as well. Dominic Mazzoni and Roger B. Dannenberg from Carnegie Mellon University describe 'A Fast Data Structure for Disk-Based Audio Editing'. In this highly technical, engineering-oriented article, they describe an approach which combines the advantages of two basic types of music editors: the non-destructive sample-mixing kind (e.g. Cubase) and the waveform reprocessing kind (e.g. CoolEdit). Their program, nicely called 'Audacity', involves the storage of blocks in nodes and keeping track of sequences of these blocks in graphs and trees. Editing operations are usually performed on at most a few blocks or a few nodes at a time. A history of changes can be kept in a memory stack, allowing a theoretically unlimited number of 'undoes' without wasting too much storage space. Audacity is freely available for download at audacity.sourceforge.net . Eduardo Reck Miranda from the SONY Computer Science Lab in Paris explores 'Emergent Sound Repertoires in Virtual Societies'. He simulated the emergence of music in a freely communicating society. This is a most interesting contribution for those who are interested in robotics, the study of emergent behaviour and the origin of communication systems. Miranda clearly explains the motivation for his research, his methodology and the implementation of the virtual community. In short: agents in the community are fitted with sound production and perception modules. They start with an empty memory and interact in a game of 'uttering' sounds, imitating them and reinforcing successful sounds and forgetting unsuccessful ones. By playing several hundreds of rounds of games in a row, a community of twenty agents gradually evolves a shared repertoire of about five to six 'meaningful' sounds. Using these and a simple grammar, it is possible to let them create a proto-conversation. Whether the resulting sound can be called music is doubtful, but that is not really the issue. 'Music' is a name we give to a subset of all our communicative interactions. The amazing thing is that this and similar experiments clearly show the emergence of a limited repertoire of sounds as a result of and a prerequisite for social bonding in a society of individuals whose main traits are an auditory apparatus and a strong drive to imitate and communicate. "Groven.Max: An Adaptive Tuning System for MIDI Pianos" by David Leberg Code is the odd one out in this issue. Code, currently at Western Michigan University, has developed some of the ideas and experiments of Eivind Groven, a Norwegian composer and ethnomusicologist who strove to build instruments in just intonation. Groven.Max is a MIDI patch designed to distribute the notes played on one keyboard to three differently tuned pianos in order to emulate a tuning system using pure intervals from the harmonic series. In this article, historic and theoretical backgrounds are summarized and a general outline of the system is given. The Groven Piano premiered in Oslo in April 2001. Anyone interested in intonations and organology will find this an inspiring read. Stefaan Van Ryssen, Jan Delvinlaan Leonardo Digital Reviews

GOR010752861
What Is Cognitive Science? by Barbara Von Eckardt (Dean of Liberal Arts)
Barbara Von Eckardt (Dean of Liberal Arts)
A Bradford Book
Used - Very Good
Paperback
MIT Press Ltd
1995-03-02
477
026272023X
9780262720236
N/A
Book picture is for illustrative purposes only, actual binding, cover or edition may vary.
This is a used book - there is no escaping the fact it has been read by someone else and it will show signs of wear and previous use. Overall we expect it to be in very good condition, but if you are not entirely satisfied please get in touch with us.