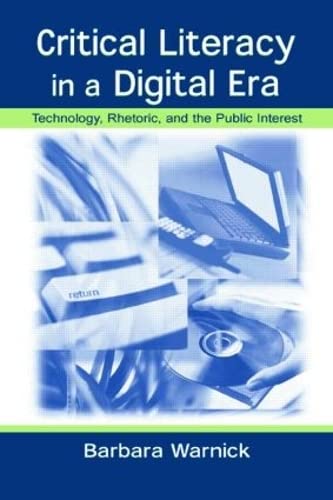 Critical Literacy in A Digital Era
by Barbara Warnick

Out of Stock
$46.99
inc. GST
This work contributes to critical thinking about public issues related to technology development. Its aims are to examine how certain values, such as progress and profit, are elevated in such public discourse, while others, such as community and social justice, are displaced.
Very Good
Only 0 left

Critical Literacy in A Digital Era: Technology, Rhetoric, and the Public interest by Barbara Warnick

Critical Literacy in a Digital Era offers an examination of the persuasive approaches used in discussions on and about the Internet. Its aim is to increase awareness of what is assumed, unquestioned, and naturalized in our media experience. Using a critical literacy framework for her analysis, author Barbara Warnick argues that new media technologies become accepted not only through their use, but also through the rhetorical use of discourse on and about them. She analyzes texts that discuss new media and technology, including articles from a major technology-oriented periodical; women's magazines and Web sites; and Internet-based political parody in the 2000 presidential campaign. These case studies bring to light the persuasive strategies used by writers to influence public discourse about technology.

The book includes analyses of narrative structures, speech genres, intertextuality, argument forms, writing formulae, and patterns of emphasis and neglect used in traditional and new media outlets. As a result, this distinctive work identifies the features of online speech that bring people and ideas together and enable communities to form in new media environments.

As a unique study of the ways in which ideology is embedded in rhetorical texts, this volume will play a significant role in the development of critical literacy about writing and speech concerning new communication technology. It will be of interest to readers concerned about how our talk about communication affects how we think about it, in particular those interested in communication and social change, public persuasion, and rhetorical criticism of new media content.

GOR010431395
Critical Literacy in A Digital Era: Technology, Rhetoric, and the Public interest by Barbara Warnick
Barbara Warnick
Used - Very Good
Paperback
Taylor & Francis Inc
2001-11-01
158
0805841164
9780805841169
N/A
Book picture is for illustrative purposes only, actual binding, cover or edition may vary.
This is a used book - there is no escaping the fact it has been read by someone else and it will show signs of wear and previous use. Overall we expect it to be in very good condition, but if you are not entirely satisfied please get in touch with us.