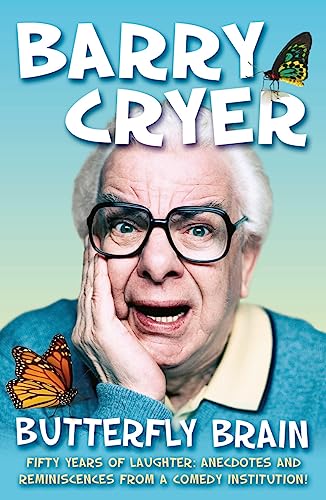 Used Price
$17.99
inc. GST
Free Shipping in Australia
Barry Cryer is one of the great comedians of the last 50 years. This is a sparkling series of hilarious and true anecdotes, almost all of which have never been told before!
Reviews:
Trustpilot
Very Good Good

Barry Cryer is one of the great comedians of the last 50 years. This is a sparkling series of hilarious and true anecdotes, almost all of which have never been told before!

Barry Cryer has collaborated with all the greats from Max Miller to Tony Hancock, Bob Hope, Peter Cook and Dudley Moore, John Cleese, Frankie Howerd, Kenny Everett, Spike Milligan, Eric Sykes, Dave Allen, Richard Pryor, Tommy Cooper, Les Dawson, Graham Chapman, the Two Ronnies, Morecambe and Wise - in fact almost all the great comedians and comic writers since the mid 1950s. Barry's set of experiences with these legends of humour is unique, and will delight all who made PIGS CAN FLY a runaway porcine bestseller.

Fascinating to read and difficult to put down. * THE PRESS *

Barry Cryer's writing credits include material for Morecambe and Wise, Tommy Cooper, Les Dawson, Bruce Forsyth, Rory Bremner and Kenny Everett, to name but a few. As if this was not enough, he has also collaboratively penned series like HELLO CHEEKY! and appears regularly on I'M SORRY I HAVEN'T A CLUE, and JUST A MINUTE. Recently he has been delighting audiences with his 'Still Alive!' national tour. He was made an OBE for services to comedy in 2001.

GOR002437057
Butterfly Brain by Barry Cryer
Barry Cryer
Used - Very Good
Paperback
Orion Publishing Co
2010-10-28
208
1409119947
9781409119944
N/A
Book picture is for illustrative purposes only, actual binding, cover or edition may vary.
This is a used book - there is no escaping the fact it has been read by someone else and it will show signs of wear and previous use. Overall we expect it to be in very good condition, but if you are not entirely satisfied please get in touch with us.