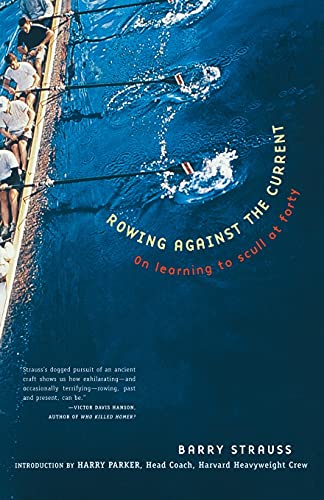 Rowing Against the Current
by Barry Strauss

Rowing Against the Current Summary

Rowing Against the Current: On Learning to Scull at Forty by Barry Strauss

In the midst of the standard, dreary midlife crisis -- complete with wine-tasting courses, yoga classes, and a failed attempt at a first novel -- forty-year-old Barry Strauss falls unexpectedly and passionately in love with rowing, a sport in which a twenty-seven-year-old is a has-been.
Strauss, a professor of classics and history, writes about the unanticipated delights of an affair that, like so many others, begins as a casual dalliance and develops into a full-blown obsession. Drawn to the sport in part because of his affinity for Greek antiquity, he develops a love for old boathouses, a longing for rivers at dawn, a thirst to test himself, and, ultimately, a renewed sense of self-reliance -- as someone who had experienced sports humiliation as far back as Little League suddenly finds himself bursting into athleticism at an unlikely age.
From the awe-inspiring feats of the war-bound Greek triremes with their crews of 172 men rowing on three levels to the solitary pride of finishing a first race in which he gets stuck in the weeds and has to be fished out, Barry Strauss shows us why "there is nothing -- absolutely nothing -- half as much worth doing as simply messing about in boats."

Customer Reviews - Rowing Against the Current

Rowing Against the Current Reviews

Victor Davis Hanson, author of Who Killed Homer? Strauss's dogged pursuit of an ancient craft shows us how exhilarating -- and occasionally terrifying -- rowing, past and present, can be.
Jay Parini author of Benjamin's Crossing Sometimes a book takes you by surprise...Rowing Against the Current is written with such a wonderfully physical sense of this ancient sport. This is a story about remaking oneself in middle age; as such it overwhelmed me, as it will a large raft of readers. Bravo to Barry Strauss.

Barry Strauss, professor of history and classics at Cornell University, is a leading expert on ancient military history. He has written or edited several books, including The Battle of Salamis, The Trojan War, and The Spartacus War.

GOR005809751
Rowing Against the Current: On Learning to Scull at Forty by Barry Strauss
Barry Strauss
Used - Very Good
Paperback
Simon & Schuster
2001-04-01
176
0684863308
9780684863306
N/A
Book picture is for illustrative purposes only, actual binding, cover or edition may vary.
This is a used book - there is no escaping the fact it has been read by someone else and it will show signs of wear and previous use. Overall we expect it to be in very good condition, but if you are not entirely satisfied please get in touch with us.