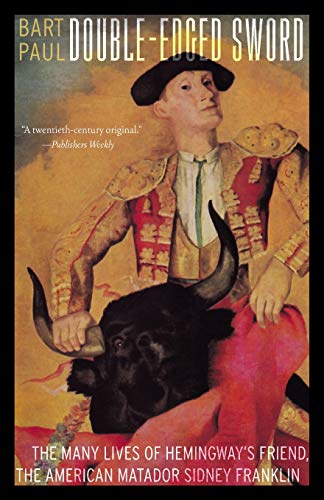 The story of Sidney Franklin, a gay Jewish American bullfighter who triumphed over prejudice and adversity as he achieved what no American had ever accomplished, teaching Ernest Hemingway lessons in grace, machismo, and respect.

Double-Edged Sword: The Many Lives of Hemingway's Friend, the American Matador Sidney Franklin by Bart Paul

Sidney Franklin (1903-76) was the last person you'd expect to become a bullfighter. The streetwise son of a Russian Jewish cop, Franklin had an all-American boyhood in early twentieth-century Brooklyn, while hiding the fact that he was gay. A violent confrontation with his father sent him packing to Mexico City, where first he opened a business, then opened his mouth-bragging that Americans had the courage to become bullfighters. Training with iconic matador Rodolfo Gaona, Franklin's dare spawned a legend.

Following years in small-town Mexican bullrings, he put his moxie where his mouth was, taking Spain by storm as the first American matador. Franklin's 1929 rise coincided with that of his friend Ernest Hemingway's, until a bull's horn in a most inappropriate place almost ended his career-and his life.

Bart Paul illuminates the artistry and violence of the mysterious ritual of the bulls as he tells the story of this remarkable man, from life in revolutionary Mexico to triumphs in Spain, from the pages of Death in the Afternoon to the destructive vortex of Hemingway's affair with Martha Gellhorn during the bloody Spanish Civil War.

This is the story of a gay man who triumphed over prejudice and adversity as he achieved what no American had ever accomplished, teaching even Hemingway lessons in grace, machismo, and respect.


Interjecting his opinions clearly while letting readers judge Franklin's motives for themselves, Paul presents an absorbing biography of a twentieth century original, a confidante, lover, narcissist, and bravura performer whose capacity for suffering captured one of America's greatest literary minds.-Publishers Weekly
* Publishers Weekly *
Lovingly and engagingly written.-Kate McLoughlin, Times Literary Supplement -- Kate McLoughlin * Times Literary Supplement *
Finally! A fascinating, in-depth, warts-and-all biography of the legendary Hemingway hero, surely one of the great picaresque and colorful enigmas of modern times. Ears and tail to Bart Paul!-Barnaby Conrad, author of Matador and The Death of Manolete -- Barnaby Conrad
A must-read for all those interested in Ernest Hemingway's life and loves, even if bullfighting leaves them cold.-Martin Rubin, Washington Times

-- Martin Rubin * Washington Times *
Since people began writing about the adventurous life of Sidney Franklin, be it Lillian Ross, Ernest Hemingway or others, [his story] seems to be shrouded in hyperbole, mystery, or just plain b.s. It's taken Bart Paul to come along and tell the whole truth. I am very happy that after all these years, a real biography has finally been written. Congratulations, Bart Paul. Por fin, la verdad.-Tony Brand, Aficionado practico and scholar of bullfighting -- Tony Brand
In this well-researched biography, Bart Paul deftly depicts the extraordinary life of the Jewish boy from Brooklyn who became the most famous American bullfighter. Franklin not only was Ernest Hemingway's inside informant while he was writing Death in the Afternoon, the writer arranged for the bullfighter to accompany him to Spain while he covered the Spanish Civil War in the late 1930s. Mr. Paul captures Franklin's wavering fortunes, alongside all the glitter, the gossip and the turmoil of the taurine scene in the early to mid twentieth century.-Valerie Hemingway, author of Running with the Bulls: My Years with the Hemingways -- Valerie Hemingway
Bart Paul is the author of the acclaimed High Country Noir series of novels: Under Tower Peak-called one of the ten best mysteries of 2013, Cheatgrass, and See That My Grave Is Kept Clean. He has also written documentaries on subjects as diverse as Masada and Nazi atrocities in Poland. Paul now lives in the ranching country of the Eastern Sierra's California-Nevada border.

3. The Wisdom of the Aztec

7. Death in the Afternoon -with Drinks and Dinner to Follow