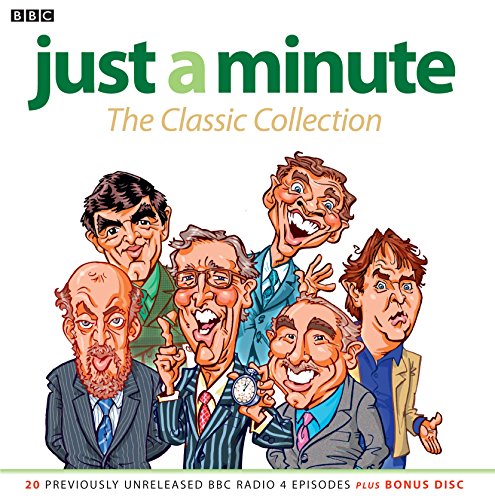 Just A Minute: The Classic Collection
by BBC

Kenneth Williams, Clement Freud, Derek Nimmo, Peter Jones and Paul Merton are the 'Famous Five' of Just a Minute: sparkling raconteurs whose sharp wits and skill made them consistently a pleasure to listen to.

Kenneth Williams, Clement Freud, Derek Nimmo, Peter Jones and Paul Merton are the 'Famous Five' of Just a Minute: sparkling raconteurs whose sharp wits and skill made them consistently a pleasure to listen to. Each brings their own unique quality to the show, and this box set showcases their highlights - the moments which reveal these talented players at the very top of their game. Also among the featured shows are the first ever Just a Minute, plus the 25th anniversary edition and the infamous episode when Clement Freud failed to appear and the show's ever capable chairman Nicholas Parsons replaced him as a panellist. Full of fast-paced, irreverent fun and ferocious competition, this collection is a goldmine of wonderful comedy nuggets from five fantastically funny comedians.

The formula for this long-running and popular radio panel game was devised in the early 1950s by Ian Messiter, a Light Entertainment producer who was on the staff of the BBC from 1942 to 1952. Although Just A Minute was Messiter's preferred name for the show, the Head of Light Entertainment thought this too slick - and insisted the show be called One Minute, Please. The idea came from a humiliating experience that Messiter had suffered as a schoolboy at Sherborne. The 13-year-old had been staring out of the window, daydreaming during a Latin class. Suddenly the Latin master, Parry-Jones, told him to come up to the front of the class and repeat what had just been said without hesitating or repeating himself. Of course he couldn't, and the resultant caning in front of the class provided a lasting lesson. In that first show Roy Plomley acted as Chairman, with Gilbert Harding, Kenneth Horne and Reggie Purdell pitting their wits against Yvonne Arnaud, Valerie Hobson and Nan Kenway. One Minute, Please was responsible for introducing the versatile talents of the artist, tuba player and raconteur Gerard Hoffnung to a wider audience. It was on the show that Hoffnung first told his famous Bricklayer Story, which was used to warm up the audience before the start of the programme. In 1952 Messiter left the BBC and set up a commercial radio station in Johannesburg. According to Ian's wife Enid Messiter, it was here that Just A Minute first went on air in the format we know. Ian Messiter produced and chaired the programme, and Enid herself played Chopin's Minute Waltz for these South African recordings. In 1967 the Messiters returned to England, and a pilot edition of Just A Minute was proposed to Roy Rich, then Head of Light Entertainment for BBC radio. The pilot was made, but initially rejected. Producer David Hatch threatened to resign unless it was offered to BBC Radio 4 planners. It was, and the rest is history. In addition to the radio series, there have been several TV series on both ITV and BBC. For many years the regular panellists included Clement Freud, Derek Nimmo, Kenneth Williams and Peter Jones. As their numbers dwindled in the early 1990s, however, an increasing number of guests joined the show. Paul Merton has become a mainstay of latter-day Just A Minute, while many others now form a pool of semi-regular contestants. In 2003 the programme won a Gold Sony Radio Academy Award, and in 2012 it celebrated its 45th year. With Nicholas Parsons at the helm for its entire tenure, Just A Minute has been a continually popular feature of the Radio 4 schedules. Decade after decade it has succeeded in both finding new fans and pleasing its legion of loyal older ones.

GOR006065396
Just A Minute: The Classic Collection: 22 Original BBC Radio 4 Episodes by BBC
BBC
Used - Very Good
Hardback
BBC Audio, A Division Of Random House
2011-10-06
1408469995
9781408469996
N/A
Book picture is for illustrative purposes only, actual binding, cover or edition may vary.
This is a used book - there is no escaping the fact it has been read by someone else and it will show signs of wear and previous use. Overall we expect it to be in very good condition, but if you are not entirely satisfied please get in touch with us.