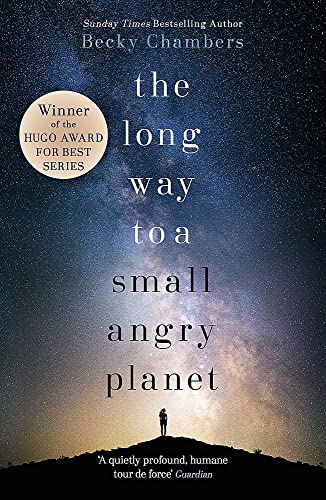 The Long Way to a Small, Angry Planet
by Becky Chambers

In Stock
$211.99
inc. GST
The beloved debut novel 'that will restore your faith in science fiction (specifically) and humanity (in general).' (Tor.com)
Like New Very Good
Only 1 left

The Long Way to a Small, Angry Planet Summary

The Long Way to a Small, Angry Planet: Wayfarers 1 by Becky Chambers

***SHORTLISTED FOR THE ARTHUR C. CLARKE AWARD****** SHORTLISTED FOR THE KITSCHIES GOLDEN TENTACLE****** LONGLISTED FOR THE BAILEY'S WOMEN'S PRIZE FOR FICTION 2016*** The astonishing self-published debut novel that Guardian calls 'a quietly profound, humane tour de force.'When Rosemary Harper joins the crew of the Wayfarer, she isn't expecting much. The Wayfarer, a patched-up ship that's seen better days, offers her everything she could possibly want: a small, quiet spot to call home for a while, adventure in far-off corners of the galaxy, and distance from her troubled past.But Rosemary gets more than she bargained for with the Wayfarer. The crew is a mishmash of species and personalities, from Sissix, the friendly reptillian pilot, to Kizzy and Jenks, the constantly sparring engineers who keep the ship running. Life on board is chaotic, but more or less peaceful - exactly what Rosemary wants.Until the crew are offered the job of a lifetime: the chance to build a hyperspace tunnel to a distant planet. They'll earn enough money to live comfortably for years...if they survive the long trip through war-torn interstellar space without endangering any of the fragile alliances that keep the galaxy peaceful. But Rosemary isn't the only person on board with secrets to hide, and the crew will soon discover that space may be vast, but spaceships are very small indeed.

The Long Way to a Small, Angry Planet Reviews

A joyous, optimistic space opera... Although it isn't shy about tackling Big Questions, PLANET is a heart-warming debut novel that will restore your faith in science fiction (specifically) and humanity (in general). * Tor.com *
One of the most enjoyable, brilliantly realised spacey SF novels I've read in ages. -- James Smythe, author of The Echo
One of the most delightful novels science-fiction that I've read in recent years. * Citior SF *
The Long Way is, very simply, an extremely good book, a seemingly effortless demonstration of how progressive and enjoyable science fiction can be. * Pornokitsch *
A huge amount of space-opera-y fun, with some interestingly nuanced perspectives on gender woven into the whole. -- Adam Roberts, author of Jack Glass

Becky Chambers is the author of the Wayfarers books, which currently include The Long Way to a Small, Angry Planet, A Closed and Common Orbit, and Record of a Spaceborn Few. Her books have been nominated for the Hugo Award, the Arthur C. Clarke Award, and the Women's Prize for Fiction, among others, and won the Prix Julia Verlanger in 2017. She grew up in a family heavily involved in space science, and hopes to see Earth from orbit one day.

GOR007964773
The Long Way to a Small, Angry Planet: Wayfarers 1 by Becky Chambers
Becky Chambers
Wayfarers
Used - Like New
Paperback
Hodder & Stoughton
2015-12-31
432
1473619815
9781473619814
Short-listed for The Kitschies Golden Tentacle 2014 (UK)
Book picture is for illustrative purposes only, actual binding, cover or edition may vary.
This is a used book - there is no escaping the fact it has been read by someone else and it will show signs of wear and previous use. Overall we expect it to be in very good condition, but if you are not entirely satisfied please get in touch with us.