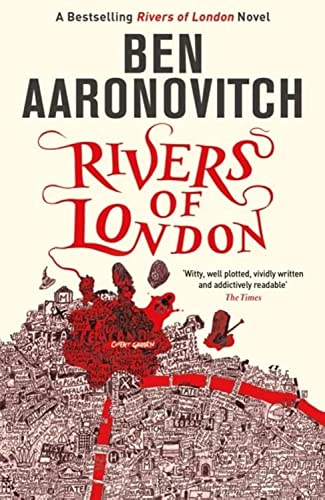 Rivers of London
by Ben Aaronovitch

My name is Peter Grant and until January I was just probationary constable in that mighty army for justice known to all right-thinking people as the Metropolitan Police Service (and as the Filth to everybody else). My only concerns in life were how to avoid a transfer to the Case Progression Unit - we do paperwork so real coppers don't have to - and finding a way to climb into the panties of the outrageously perky WPC Leslie May. Then one night, in pursuance of a murder inquiry, I tried to take a witness statement from someone who was dead but disturbingly voluble, and that brought me to the attention of Inspector Nightingale, the last wizard in England.

Now I'm a Detective Constable and a trainee wizard, the first apprentice in fifty years, and my world has become somewhat more complicated: nests of vampires in Purley, negotiating a truce between the warring god and goddess of the Thames, and digging up graves in Covent Garden ... and there's something festering at the heart of the city I love, a malicious vengeful spirit that takes ordinary Londoners and twists them into grotesque mannequins to act out its drama of violence and despair.

The spirit of riot and rebellion has awakened in the city, and it's falling to me to bring order out of chaos - or die trying.

Rivers of London manages to be fresh and original and a wonderful read. I loved it * Charlaine Harris *
What would happen if Harry Potter grew up and joined the Fuzz. A hilarious, keenly imagined caper * Diana Gabaldon *
A consummate story of real policing in a vividly real world intersecting the decidedly unreal to marvellous effect. Filled with detail and imagination, the quality of this achievement stands out, making Aaronovitch a name to watch * Peter F. Hamilton *
Magical, mysterious and mesmerising, Rivers of London will have you spellbound * Total Sci Fi *
An engaging mix of magic and police procedural, this is a great kick off to a very promising series as well as the most satisfying fantasy thriller to hit bookshelves in quite some time. Witty, imaginative and gripping * SFX *
We can't fault the pace, ingenuity and creativity of Rivers of London. With each page, we're eager to learn more about this mysterious new world, set on very familiar streets * Londonist.com *
The perfect blend of CSI and Harry Potter * i09 *
Great, great fun * Simon Mayo, Radio 2 *
Funny and wildly inventive * Mail on Sunday *
It's a real treat - Hot Fuzz meets Harry Potter via hardboiled police procedural - with a compelling cast of characters and a nail-biting mystery to be solved * Living North *
An incredibly fast-moving magical joyride for grown-ups * The Times *
A darkly comic read with characters you can't help but like * The Sunday Express *

GOR003092088
Rivers of London: The First Rivers of London novel by Ben Aaronovitch
Ben Aaronovitch
A Rivers of London novel
Used - Very Good
Paperback
Orion Publishing Co
2011-08-25
432
0575097582
9780575097582
Short-listed for Galaxy National Book Awards: Galaxy New Writer of the Year 2011
Book picture is for illustrative purposes only, actual binding, cover or edition may vary.
This is a used book - there is no escaping the fact it has been read by someone else and it will show signs of wear and previous use. Overall we expect it to be in very good condition, but if you are not entirely satisfied please get in touch with us.