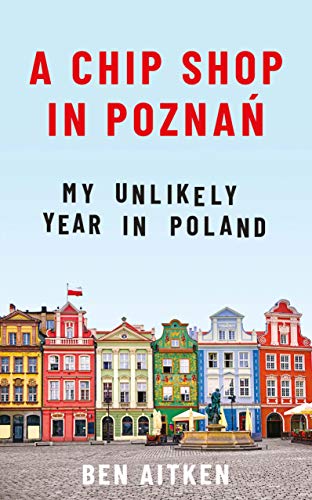 A Chip Shop in Poznan
by Ben Aitken

In Stock
$26.49
inc. GST
Why do the Poles leave Poland? Travel writer Ben Aitken booked a one-way ticket to Poznan to find out. This account of his year is a bittersweet portrait of an unsung country.
Very Good
8 in stock

A Chip Shop in Poznan Summary

A Chip Shop in Poznan: My Unlikely Year in Poland by Ben Aitken

'One of the funniest books of the year' - Paul Ross, talkRADIO
WARNING: CONTAINS AN UNLIKELY IMMIGRANT, AN UNSUNG COUNTRY, A BUMPY ROMANCE, SEVERAL SHATTERED PRECONCEPTIONS, TRACES OF INSIGHT, A DOZEN NUNS AND A REFERENDUM.
Not many Brits move to Poland to work in a fish and chip shop.
Fewer still come back wanting to be a Member of the European Parliament.
In 2016 Ben Aitken moved to Poland while he still could. It wasn't love that took him but curiosity: he wanted to know what the Poles in the UK had left behind. He flew to a place he'd never heard of and then accepted a job in a chip shop on the minimum wage.
When he wasn't peeling potatoes he was on the road scratching the country's surface: he milked cows with a Eurosceptic farmer; missed the bus to Auschwitz; spent Christmas with complete strangers and went to Gdansk to learn how communism got the chop. By the year's end he had a better sense of what the Poles had turned their backs on - southern mountains, northern beaches, dumplings! - and an uncanny ability to bone cod.
This is a candid, funny and offbeat tale of a year as an unlikely immigrant.

A Chip Shop in Poznan Reviews

'One of the funniest books of the year' -- Paul Ross, talkRADIO
'A fascinating insight ... Poland is a zone that has largely been ignored by talented travel writers [and this] is therefore a welcome addition. A captivating and entertaining account.' * The First News (Poland) *
'A clever, critical and witty travel book about Poland' * Polish Cultural Institute *
'A fascinating book [...] We should know more than we do about Poland, a nation with which we have had centuries of interaction. Ben Aitken's excellent book is probably the best place to start.' * The New European *
'Adeptly balances personal ruminations on love, attraction, and friendship, with cultural evaluations that subvert British stereotypes of Polish citizens [...] An engaging romp through Polish culture, with a resonant political message of the importance of interacting with other cultures and preserving our ties with Europe.' * The London Magazine *

Ben Aitken was born under Thatcher, grew to 6ft then stopped, and is an Aquarius. He is the author of Dear Bill Bryson: Footnotes from a Small Island (2015), which was featured in the Guardian, The Times and on BBC Radio, and described by the Manchester Review as a 'poignant comment on the state of the nation' and a 'highly accomplished homage'. In 2016 Aitken moved to Poland to work in a fish and chip shop. This book is the fruit of that unlikely migration.

GOR010011020
A Chip Shop in Poznan: My Unlikely Year in Poland by Ben Aitken
Ben Aitken
Used - Very Good
Paperback
Icon Books Ltd
2019-07-04
306
1785785583
9781785785580
N/A
Book picture is for illustrative purposes only, actual binding, cover or edition may vary.
This is a used book - there is no escaping the fact it has been read by someone else and it will show signs of wear and previous use. Overall we expect it to be in very good condition, but if you are not entirely satisfied please get in touch with us.