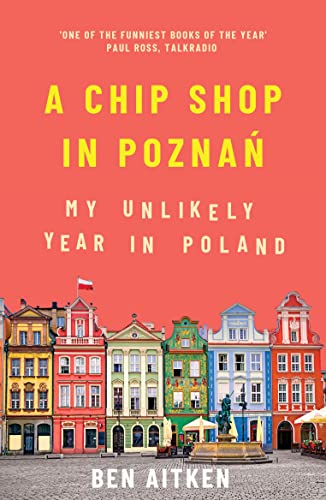 A Chip Shop in Poznan
by Ben Aitken

New Price
inc. GST
Free Shipping in Australia
Why do the Poles leave Poland? Travel writer Ben Aitken booked a one-way ticket to Poznan to find out. This account of his year is a bittersweet portrait of an unsung country.
New0.00

A Chip Shop in Poznan Summary

A Chip Shop in Poznan: My Unlikely Year in Poland by Ben Aitken

'One of the funniest books of the year' - Paul Ross, talkRADIO
WARNING: CONTAINS AN UNLIKELY IMMIGRANT, AN UNSUNG COUNTRY, A BUMPY ROMANCE, SEVERAL SHATTERED PRECONCEPTIONS, TRACES OF INSIGHT, A DOZEN NUNS AND A REFERENDUM.
Not many Brits move to Poland to work in a fish and chip shop.
Fewer still come back wanting to be a Member of the European Parliament.
In 2016 Ben Aitken moved to Poland while he still could. It wasn't love that took him but curiosity: he wanted to know what the Poles in the UK had left behind. He flew to a place he'd never heard of and then accepted a job in a chip shop on the minimum wage.
When he wasn't peeling potatoes he was on the road scratching the country's surface: he milked cows with a Eurosceptic farmer; missed the bus to Auschwitz; spent Christmas with complete strangers and went to Gdansk to learn how communism got the chop. By the year's end he had a better sense of what the Poles had turned their backs on - southern mountains, northern beaches, dumplings! - and an uncanny ability to bone cod.
This is a candid, funny and offbeat tale of a year as an unlikely immigrant.

A Chip Shop in Poznan Reviews

'One of the funniest books of the year' -- Paul Ross, talkRADIO
'A fascinating insight ... Poland is a zone that has largely been ignored by talented travel writers [and this] is therefore a welcome addition. A captivating and entertaining account.' * The First News (Poland) *
'A clever, critical and witty travel book about Poland' * Polish Cultural Institute *
'A fascinating book [...] We should know more than we do about Poland, a nation with which we have had centuries of interaction. Ben Aitken's excellent book is probably the best place to start.' * The New European *
'Adeptly balances personal ruminations on love, attraction, and friendship, with cultural evaluations that subvert British stereotypes of Polish citizens [...] An engaging romp through Polish culture, with a resonant political message of the importance of interacting with other cultures and preserving our ties with Europe.' * The London Magazine *

Ben Aitken was born under Thatcher, grew to 6ft then stopped, and is an Aquarius. He is the author of Dear Bill Bryson: Footnotes from a Small Island (2015), which was featured in the Guardian, The Times and on BBC Radio, and described by the Manchester Review as a 'poignant comment on the state of the nation' and a 'highly accomplished homage'. In 2016 Aitken moved to Poland to work in a fish and chip shop. This book is the fruit of that unlikely migration.