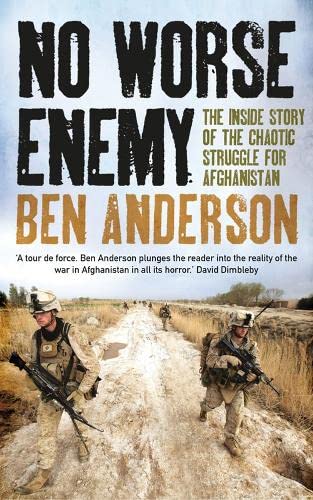 No Worse Enemy by Ben Anderson

The chilling modern classic on the disastrous war in Afghanistan, now available in paperback

No Worse Enemy: The Inside Story of the Chaotic Struggle for Afghanistan by Ben Anderson

The war in Afghanistan is over ten years old. It has cost countless lives and hundreds of billions of pounds. Politicians talk of progress, but the violence is worse than ever.

In this powerful and shocking expose from the front lines in Helmand province, leading journalist and documentary-maker Ben Anderson (HBO, Panorama, and Dispatches) shows just how bad it has got. Detailing battles that last for days, only to be fought again weeks later, Anderson witnesses IED explosions and sniper fire, amid disturbing incompetence and corruption among the Afghan army and police. Also revealing the daily struggle to win over the long-suffering local population, who often express open support for the Taliban, No Worse Enemy is a heartbreaking insight into the chaos at the heart of the region.

Raising urgent questions about our supposed achievements and the politicians' desire for a hasty exit, Anderson highlights the vast gulf that exists between what we are told and what is actually happening on the ground. A product of five years' unrivalled access to UK forces and US Marines, this is the most intimate and horrifying account of the Afghan war ever published.

Essential reading * The Bookseller *
Similar to Michael Herr's high-octane Vietnam War classic, Dispatches, Anderson delivers a gritty, brutal, realistic account of British and American troops on the Afghan frontlines in a bitter counterpoint to all the policy concessions and peace chatter. * Publishers Weekly *
"Unusually courageous... With humor, compassion and a fine eye for detail, Anderson meticulously pieces together each scene with the skill of a good choreographer... [This is] an engrossing blow-by-blow account of the nuts and bolts of modern warfare." * Kirkus Reviews *
Anderson's book makes a vivid contribution to the record of the conflict, and left me gasping at his courage. * Max Hastings for The Sunday Times *
"An essential if unsettling synopsis that brutally strips away any pretence that this is a just or even necessary conflict ... Highly recommended for those with even a passing interest in what is being done in our name in far-off Afghanistan." * Military History Monthly *
'[A] brilliantly observed but troubling memoir... [an] outstanding book.' * Daily Mail *
"Wonderful... offers real insight into the war." * The Sun *
Gripping. * Warfare Magazine *
Ben Anderson is an acclaimed journalist and documentary filmmaker. In a career spanning fourteen years, he has filmed and presented over forty films for the BBC, HBO, Channel 4, and the Discovery Channel. He has presented five of his own series for BBC2, and is a regular reporter for Panorama and Dispatches. He was twice a finalist for the RTS young journalist of the year award and his HBO film The Battle for Marjah was nominated for three Emmys. In addition, he has written for The Times, GQ, Esquire and the London Review of Books. When not reporting from the field, he lives in London.
GOR005054595
No Worse Enemy: The Inside Story of the Chaotic Struggle for Afghanistan by Ben Anderson
Ben Anderson
Used - Very Good
Hardback
Oneworld Publications
2011-09-01
288
1851688528
9781851688524
Short-listed for Paddy Power and Total Politics Political Book Awards: International Affairs Book of the Year 2013 (UK)
Book picture is for illustrative purposes only, actual binding, cover or edition may vary.
This is a used book - there is no escaping the fact it has been read by someone else and it will show signs of wear and previous use. Overall we expect it to be in very good condition, but if you are not entirely satisfied please get in touch with us
Trustpilot