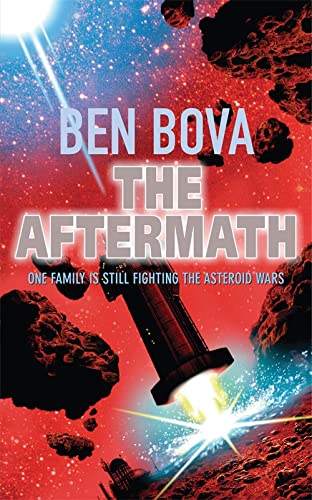 The Aftermath
by Ben Bova

The Aftermath by Ben Bova

The Second Asteroid War climaxed with the brutal destruction of Chrysalis: hundreds of men, women and children on the miners' habitat died terrible deaths in the vacuum of the asteroid belt.

But one ship escapes destruction. Low on fuel, her communications destroyed, the ore ship Syracuse flees towards deep space with fifteen-year-old Theo Zacharias at the helm.

Three years later, the war long over, Syracuse still drifts through the void. Meanwhile the man who now calls himself Dorn - the destroyer of Chrysalis - roams space gathering up the bodies of his victims. He encounters Theo Zacharias in a clash of purposes, hopes and fury . . .

The science fiction author who will have the greatest effect on the world. * Ray Bradbury *
A masterful storyteller * Vector *
Fun, thought-provoking, pacy and stylish . . . Gives a good read while turning your eyes to what might be in the not so distant future, just like Clarke and Asimov used to do so well. * SFX on VENUS *
A splendid book . . . of his many books, Mars must be the most important. * Arthur C. Clarke *
Vivid, poetic and wonder-provoking. * Foundation on JUPITER *

An award-winning editor, President Emeritus of the National Space Society and a Fellow of the British Interplanetary Society, Ben Bova is also the author of more than one hundred futuristic novels and non-fiction books. He and his wife live in Florida.

GOR001986759
The Aftermath by Ben Bova
Ben Bova
Used - Very Good
Paperback
Hodder & Stoughton General Division
2008-10-30
512
0340823992
9780340823996
N/A
Book picture is for illustrative purposes only, actual binding, cover or edition may vary.
This is a used book - there is no escaping the fact it has been read by someone else and it will show signs of wear and previous use. Overall we expect it to be in very good condition, but if you are not entirely satisfied please get in touch with us.