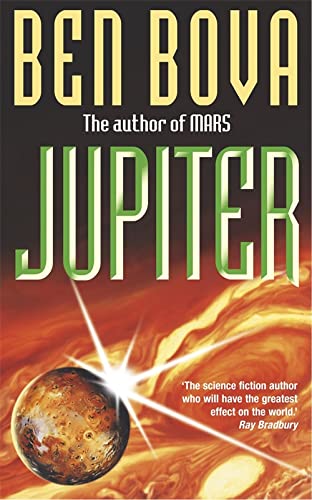 In Stock
$11.49
+10% GST
Jupiter is a boundless ocean, ten times wider than the entire planet Earth. Heated from below by the planet's seething core, it is the widest, deepest, most fearsome ocean in the solar system.
Very Good Good
Only 2 left

Idealistic young American scientist Grant Archer joins a clandestine expedition to this awesome new world. But Grant does not share the ideals of the scientists he accompanies: he has been planted on their expedition by the New Morality, a religious group that wants to ferret what the 'godless humanists' have discovered. His mission: to reassure the new religious leaders of Earth that Jupiter holds no intelligent life.

But unknown to the New Morality, Grant, though the son of a minister, is both a believer and a man who sees no reason why science and faith can not co-exist. He has come to the vast, planet-girdling ocean of Jupiter with an open mind, and he is about to tell his masters something that may shatter their conviction.

Mars
'A splendid book . . of his many books, Mars must be the most important.' Arthur C. Clarke
'Extraordinary . . . this kind of story is the reason science fiction exists in the first place.' Orson Scott Card

Death Dream
'The prophetic vision of one of the world's great masters of the genre of science fiction.' Books

Fun, thought-provoking, pacy and stylish . . . Gives a good read while turning your eyes to what might be in the not so distant future, just like Clarke and Asmov used to do so well. * SFX (Venus) *
A tense and totally believable novel by an internationally acknowledged SF master. * Publishing News *

Moonrise
'Heady oxygen is breathed into old bones as Bova colonises the moon.' Scotland on Sunday
'Bova's picture of life on the moon is highly believable.' Publishers Weekly

Moonwar
'What happens to Moonbase and its inhabitants is as exciting as the future that could be ours.' Tampa Tribune and Times

GOR002608257
Jupiter by Ben Bova
Ben Bova
Used - Very Good
Paperback
Hodder & Stoughton General Division
2001-02-15
448
0340767650
9780340767658
N/A
Book picture is for illustrative purposes only, actual binding, cover or edition may vary.
This is a used book - there is no escaping the fact it has been read by someone else and it will show signs of wear and previous use. Overall we expect it to be in very good condition, but if you are not entirely satisfied please get in touch with us.