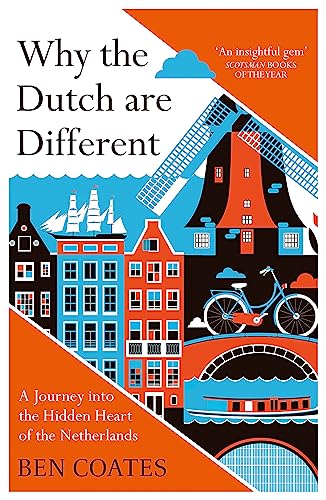 Why the Dutch are Different
by Ben Coates

Why the Dutch are Different is the internationally bestselling portrait of a fascinating people and the country that was the setting for Tulip Fever.

Why the Dutch are Different Summary

Why the Dutch are Different: A Journey into the Hidden Heart of the Netherlands: From Amsterdam to Zwarte Piet, the acclaimed guide to travel in Holland by Ben Coates

*A SCOTSMAN TRAVEL BOOK OF THE YEAR*

Stranded at Schiphol airport, Ben Coates called up a friendly Dutch girl he'd met some months earlier. He stayed for dinner. Actually, he stayed for good.

In the first book to consider the hidden heart and history of the Netherlands from a modern perspective, the author explores the length and breadth of his adopted homeland and discovers why one of the world's smallest countries is also so significant and so fascinating. It is a self-made country, the Dutch national character shaped by the ongoing battle to keep the water out from the love of dairy and beer to the attitude to nature and the famous tolerance.

Ben Coates investigates what makes the Dutch the Dutch, why the Netherlands is much more than Holland and why the colour orange is so important. Along the way he reveals why they are the world's tallest people and have the best carnival outside Brazil. He learns why Amsterdam's brothels are going out of business, who really killed Anne Frank, and how the Dutch manage to be richer than almost everyone else despite working far less. He also discovers a country which is changing fast, with the Dutch now questioning many of the liberal policies which made their nation famous.

A personal portrait of a fascinating people, a sideways history and an entertaining travelogue, Why the Dutch are Different is the story of an Englishman who went Dutch. And loved it.

Why the Dutch are Different Reviews

Vivid and informative. Coates intertwines the nationa s journey to its modern iteration with his own adaptation to the Dutch lifestyle. An accomplished debut.--Geographical
A book as quietly appealing as its subject and full of fascinating details. Coates is entirely convincing in his affectionate portrait.--Prospect
A striking portrait of the Netherlands in the 21st century, offering a refreshing and long overdue update of the way the Dutch national character is described.--Edinburgh Book Review
Fascinating. Thoroughly researched and well thought out, Why the Dutch are Different takes us on a journey that goes beyond red-lit windows and Anne Frank to the true depths of the country. Ben Coates's day-to-day life sits effortlessly alongside deeper dives into history and folklore. A friendly read that strikes the right balance between teaching and entertaining.--The Bookbag
I thoroughly recommend this book. Why the Dutch are Different provides the answers to all the questions I had but didn't dare ask about the Netherlands. I eagerly sat up late into the night reading, laughing often and enjoying the ride into my adopted homeland.--DutchNews
In Why the Dutch are Different, a torch beam of scrutiny plays across the country's past and its lesser known foibles. Author Ben Coates has produced an insightful gem.--Scotsman - Books of the Year
One of the few books on our near-neighbour, Coates gets under the skin of a nation renowned for its liberalism.--The Bookseller

Ben Coates was born in Britain in 1982. After completing a master's degree in economics, he worked as a political adviser, corporate speechwriter, lobbyist and aid worker in Britain, the Netherlands and in Africa. He is the author of the bestselling Why the Dutch are Different, and has reported for the BBC, Independent, Scotsman and Irish Times. He lives with his Dutch wife in a cottage in the countryside near Gouda.

GOR008416674
Why the Dutch are Different: A Journey into the Hidden Heart of the Netherlands: From Amsterdam to Zwarte Piet, the acclaimed guide to travel in Holland by Ben Coates
Ben Coates
Used - Very Good
Paperback
John Murray Press
2017-04-06
304
1857886852
9781857886856
N/A
Book picture is for illustrative purposes only, actual binding, cover or edition may vary.
This is a used book - there is no escaping the fact it has been read by someone else and it will show signs of wear and previous use. Overall we expect it to be in very good condition, but if you are not entirely satisfied please get in touch with us.