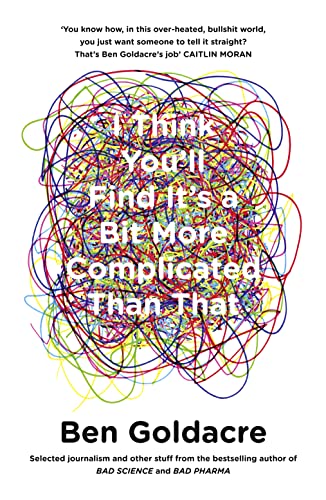 The very best journalism from one of Britain's most admired and outspoken science writers, author of the bestselling Bad Science and Bad Pharma.

The very best journalism from one of Britain's most admired and outspoken science writers, author of the bestselling Bad Science and Bad Pharma.

In Bad Science, Ben Goldacre hilariously exposed the tricks that quacks and journalists use to distort science. In Bad Pharma, he put the $600 billion global pharmaceutical industry under the microscope. Now the pick of the journalism by one of our wittiiest, most indignant and most fearless commentators on the worlds of medicine and science is collected in one volume.

`In a busy world where most of us believe what we're told, the science writer Goldacre looks behind the quackery. "Science is squabble," he says: he uses close critical appraisal to show that many medical claims are akin to magic and that television presents "real" science as cheap stage effects. And don't even get him started on bad academia, biased government and credulous media. In short, everything you take at face value is wrong. Maybe even this review: now read Ben.' The Times

`An accessible and amusing rant on science and society' Monocle

From the reviews of `Bad Science':

`For sheer savagery, the illusion-destroying, joyous attack on the self-regarding, know-nothing orthodoxies of the modern middle classes, "Bad Science" can not be beaten. You'll laugh your head off, then throw all those expensive health foods in the bin.' Trevor Philips, Observer (Book of the Year)

`Unmissable...laying about himself in a froth of entirely justified indignation, Goldacre slams the mountebanks and bullshitters who misuse science. Few escape: drug companies, self-styled nutritionists, deluded researchers and journalists all get thoroughly duffed up. It is enormously enjoyable.' The Times (Book of the Year)

From the reviews of `Bad Pharma':

`This is a book to make you enraged - properly, bone-shakingly furious...A work of brilliance.' Daily Telegraph

`An important book. Ben Goldacre is angry, and by the time you put `Bad Pharma' down, you should be too.' New Statesman

`A book that deserves to be widely read, because anyone who does read it cannot help feeling both uncomfortable and angry.' Economist

Ben Goldacre is a doctor, writer, broadcaster and academic who specialises in unpicking dodgy scientific claims from drug companies, newspapers, government reports, PR people and quacks. His first book, Bad Science, reached Number One in the non-fiction charts, sold over 400,000 copies in the UK alone, and has been translated into 25 languages. He is 38 and lives in London.

GOR007228399
I Think You'll Find It's a Bit More Complicated Than That by Ben Goldacre
Ben Goldacre
Used - Like New
Paperback
HarperCollins Publishers
2015-10-08
496
0007505140
9780007505142
N/A
Book picture is for illustrative purposes only, actual binding, cover or edition may vary.
This is a used book - there is no escaping the fact it has been read by someone else and it will show signs of wear and previous use. Overall we expect it to be in very good condition, but if you are not entirely satisfied please get in touch with us.