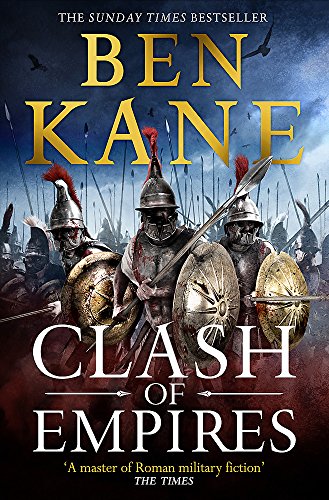 Clash of Empires by Ben Kane

HAS ROME FINALLY MET ITS MATCH? Clash Of Empires is the gripping first historical novel in a new series from the Sunday Times bestselling author - for fans of Simon Scarrow, Harry Sidebottom, Conn Iggulden and Bernard Cornwell.

Clash of Empires by Ben Kane

THE MIGHT OF ROME
The great general Hannibal Barca is on the verge of defeat. Victory will crown Rome the most powerful empire in the world. While the ambitious senator Flamininus plots his path to power...

THE GLORY OF GREECE
Only unconquered Greece stands in the way of glory. King Philip V of Macedon's mighty phalanx is an enemy Rome has long feared, and one that has never known defeat.

THE HEROES OF HISTORY
Demetrios has dreamed of fighting with the phalanx his whole life, but the young villager will soon learn that, in a clash of empires, you're only ever one swing of the sword away from death - or entering legend.

CLASH OF EMPIRES is the gripping first novel in a new series from the master of historical fiction - for fans of Simon Scarrow, Harry Sidebottom, Conn Iggulden and Bernard Cornwell.

What readers are saying about Ben Kane's masterful new historical novel:
'I have not read much about the Roman Invasion of Greece 200-197BC, so with a breath of fresh air up pops Ben Kane with a very masterful tale' Amazon review

'Grabs you from the start and never lets go' - Harry Sidebottom, author of the THE LAST HOUR

'I haven't enjoyed a book this much for ages' - Giles Kristian, author of LANCELOT
It's a broad canvas Kane is painting on, but he does it with vivid colours and, like the Romans themselves, he can show great admiration for a Greek enemy and still kick them in the balls -- Robert Low, author of the Oathsworn series
Exceptional. Kane's excelled once again in capturing the terror and the glory . . . of the ancient battlefield, and this story is one that's been begging for an expert hand for a long time -- Anthony Riches, author of the Empire series
Carried off with panache and Kane's expansive, engaging, action-packed style. A complex, fraught, moving and passionate slice of history from one of our generation's most ambitious and engaging writers. -- Manda Scott, author of the Boudica series
Grabs you from the start and never lets go. Thrilling action combines with historical authenticity to summon up a whole world in a sweeping tale of politics and war. A triumph! -- Harry Sidebottom, author of the THE LAST HOUR

The word epic is overused to describe books, but with Clash of Empires it fits like a gladius in its scabbard. What Kane does, with such mastery, is place the big story - Rome vs Greece - in the background, while making this a story about ordinary men caught up in world-defining events. Men bonded by friendship and blood. Some seeking acceptance or honour or revenge. A few grasping for power and glory, but most ultimately just trying to stay alive. I for one was fascinated by the differing tactics, fighting styles and weapons, as represented by the Roman cohort and the Greek phalanx. Or, as exhibited close up and personal in the flashing melee of the gladius and pike. These contrasts seemed to speak, with horrific eloquence, of the slaughter of the classical world of Homer and Alexander. In short, I haven't enjoyed a book this much for ages.
There aren't many writers today who could take on this story and do it well. There might be none who could do it better than Ben Kane.

-- Giles Kristian, author of LANCELOT
Ben Kane manages to marry broad narrative invention with detailed historical research . . . in taut, authoritative prose . . . his passion for the past, and for the craft of story-telling, shines from every page of Clash of Empires -- Toby Clements, author of the Kingmaker series
Fans of battle-heavy historical fiction will, justly, adore Clash of Empires. With its rounded historical characters and fascinating historical setting, it deserves a wider audience -- Antonia Senior * The Times *
This thrilling series opener delivers every cough, spit, curse and gush of blood to set up the mighty clash of the title. Can't really fault this one - pure man joy. -- Jon Wise * WEEKEND SPORT *
A powerful and vivid historical novel that moves along at chariot-race speed. -- Helena Gumley-Mason * THE LADY *
Ben Kane's new series explores the bloody final clash between ancient Greece and upstart Rome, focusing on soldiers and leaders from both worlds and telling the story of a bloody war with style -- Kate Atherton * Sunday Express S Magazine *
A thumping good read. You can feel the earth tremble from the great battle scenes and feel the desperation of those caught up in the conflict. Kane's brilliant research weaves its way lightly throughout -- David Gilman, author of the Master of War series
Kenya born, Irish by blood and UK resident, Ben Kane's passion for history has seen him change career from veterinary medicine to writing, and taken him to more than 60 countries, and all 7 continents. During his travels and subsequent research, including walking hundreds of miles in complete Roman military gear, he has learned much about the Romans and the way they lived. Ten of his thirteen novels have been Sunday Times top ten bestsellers, and his books are published in twelve languages; a million copies have sold worldwide. In 2016, his research was recognised by Bristol University with an honorary Doctor of Letters degree. Kane lives in Somerset with his wife and children, where he writes full time.
GOR009124555
Clash of Empires by Ben Kane
Ben Kane
Clash of Empires
Used - Very Good
Hardback
Orion Publishing Co
2018-05-17
448
1409173372
9781409173373
N/A
Book picture is for illustrative purposes only, actual binding, cover or edition may vary.
This is a used book - there is no escaping the fact it has been read by someone else and it will show signs of wear and previous use. Overall we expect it to be in very good condition, but if you are not entirely satisfied please get in touch with us
Trustpilot