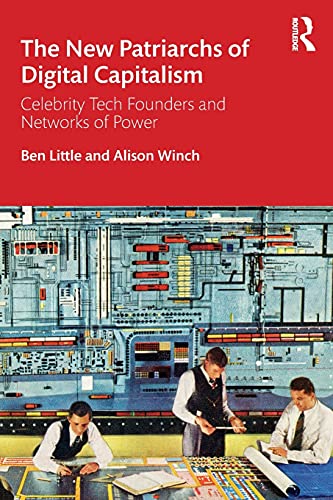 The New Patriarchs of Digital Capitalism by Ben Little

The New Patriarchs of Digital Capitalism: Celebrity Tech Founders and Networks of Power by Ben Little

This book offers an original critique of the billionaire founders of US West Coast tech companies, addressing their collective power, influence, and ideology, their group dynamics, and the role they play in the wider sociocultural and political formations of digital capitalism.

Interrogating not only the founders' political and economic ambitions, but also how their corporations are omnipresent in our everyday lives, the authors provide robust evidence that a specific kind of patriarchal power has emerged as digital capitalism's mode of command. The 'New Patriarchs' examined over the course of the book include: Sergey Brin and Larry Page of Google, Elon Musk of Tesla, Jeff Bezos of Amazon, Mark Zuckerberg of Facebook, and Peter Thiel. We also include Sheryl Sandberg. The book analyses how these (mostly) men legitimate their rapidly acquired power, tying a novel kind of socially awkward but 'visionary' masculinity to exotic forms of shareholding. Drawing on a ten million word digital concordance, the authors intervene in feminist debates on patriarchy, masculinity, and postfeminism, locating the power of the founders as emanating from a specifically racialised structure of oppression tied to imaginaries of the American frontier, the patriarchal household, and settler colonialism.

This is an important interdisciplinary contribution suitable for researchers and students across Digital Media, Media and Communication, and Gender and Cultural Studies.

For some time now, media scholars, political scientists and public commentators have been working to make sense of the manifold implications of data capitalism, surveillance culture and Big Tech ownership on democracy, the state and the future of society more generally. This book stands out as one of the most exciting and original interventions in this space. Organised as a series of case studies critiquing the world's richest and most powerful tech oligarchs, it provides a rich and meticulous account of digital capitalism's reliance on the construction of mythic celebrity personae in its pursuit of a new - and frankly terrifying - global social order. Little and Winch [the authors] demonstrate how this new breed of founding fathers engage in stage-managed acts of philanthropy, environmentalism and progressive rhetoric to legitimate new forms of power and avoid scrutiny. Inspired by paradigms from celebrity studies, they deftly expose the self-mythologising of the capitalist super-elite as foundational to the complex political economy of data colonialism. Methodologically sharp and deeply compelling, this is a searing conjunctural analysis of the dynamics that shape the new networked monopoly of patriarchs that drives technocapitalism. A comprehensive, enlightening and deeply unsettling analysis of the tech industry's inordinate power over all aspects of human life.

This is a much-needed field guide to the apex predators of tech. Little and Winch reveal the ideological terrain, the cult of celebrity, and the dominant features of patriarchal capitalism that have shaped Silicon Valley and far beyond.

- Kate Crawford, author of Atlas of AI: Power, Politics, and the Planetary Costs of Artificial Intelligence

Written at a cultural moment when people around the globe are necessarily engaging with technologies in everyday life, The New Patriarchs is an incredibly timely and brilliant analysis of the deep interrelations between and within gender, technology, and capitalism. Resisting a simplistic analysis of the founders of tech companies, Winch and Little offer us an astute framing that positions these founders within the landscapes of patriarchy, celebrity, the household, and myths of the Western frontier. A true interdisciplinary project, the book engages with feminist theory, science and technology studies, political science, and cultural studies, and thus offers us complex conceptualizations of not only the role of technology in society, but also the ways in which patriarchies structure the way we use and understand technologies, and it clearly theorizes the ideologies, histories, and values of the people who run and organize the dominant media platforms in the world.

Appendix: A concordance of popular books on digital capitalism