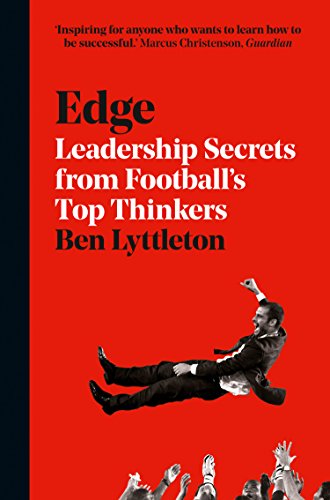 What is talent? How do you get the best out of yourself? What are the secrets of leadership?

What is talent? How do you get the best out of yourself? What are the secrets of leadership?

In Edge, Ben Lyttleton gets unprecedented access to some of the world's top football clubs to discover their innovative methods for developing talent - and reveals how we can use them in our everyday lives. Elite teams now look for an edge by improving the intangible skills of their players `above the shoulder'. Liverpool's approach to talent will make you more creative. Chelsea's culture will improve your resilience. Didier Deschamps will improve your leadership skills. Xavi Hernandez will help you make better decisions. But how?

Football is the most hot-housed, intense, financially profitable talent factory on the planet. It's time we woke up to the lessons it can provide.

We all want to have an edge. This is your chance to find one...

`I devoured this. Lyttleton's journey to the fringes of sporting thought, greedily absorbing innovations as he goes, translates into a pacy, thought-provoking work that reveals just how nuanced sporting - and indeed business - success is in the modern world. The insight into born leaders such as Didier Deschamps, who flex their style rather than their authority, is compelling, as too are the regular reminders of the capacity for old-fashioned qualities such as cohesion and resilience to trump skill and potential. Are enough businesses playing the equivalent of head-up football with their talent and resources? They may start to after reading this.' - Duncan Craig, Sunday Times

`A fascinating look at the approaches of some of European football's most impressive clubs - as well as some overachieving underdogs. Lyttleton eschews tired cliches, and instead challenges the consensus to present a fascinating insight into the intricacies of running a modern football club' - Michael Cox, author of The Mixer

`The most captivating football book I have read. The detailed insight from the game's biggest names is fascinating and each chapter left me feeling inspired and motivated.' Dean Jones, Bleacher Report

`Remarkable access to some of the biggest names in football - a tour of the game's new thinking, written up with great fluency.' - Simon Kuper, Contributor, Financial Times

`A fascinating read ... Inspiring for anyone who wants to learn how to be successful.' - Marcus Christenson, The Guardian

'Anyone looking to improve themselves as well as others should read this book.' - Alex Inglethorpe, Liverpool FC Academy Director

`If you want to be a coach, manager or successful company director, you should read Edge as it's inspiring and will give you tips from those who have done it' - Petr Cech

Ben Lyttleton is a football writer, broadcaster and director of Soccernomics. He is also the author of Twelve Yards: The Art and Psychology of the Perfect Penalty, and Football School: Where Football Explains the World, a series written to encourage children's literacy.

GOR009624789
9780008226398
0008226393
Edge: Leadership Secrets from Footballs's Top Thinkers by Ben Lyttleton
Ben Lyttleton
Used - Very Good
Paperback
HarperCollins Publishers
2018-03-08
288
N/A
Book picture is for illustrative purposes only, actual binding, cover or edition may vary.
This is a used book - there is no escaping the fact it has been read by someone else and it will show signs of wear and previous use. Overall we expect it to be in very good condition, but if you are not entirely satisfied please get in touch with us
Trustpilot