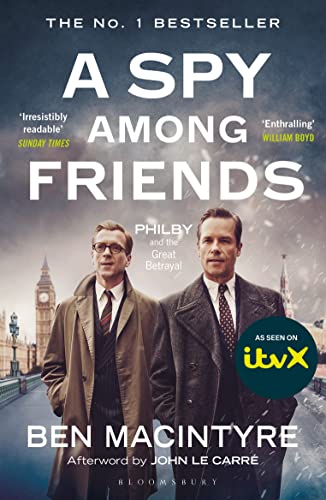 A Spy Among Friends
by Ben Macintyre

A Spy Among Friends Summary

A Spy Among Friends: Philby and the Great Betrayal by Ben Macintyre

Kim Philby was the most notorious British defector and Soviet mole in history. Agent, double agent, traitor and enigma, he betrayed every secret of Allied operations to the Russians in the early years of the Cold War. Philby's two closest friends in the intelligence world, Nicholas Elliott of MI6 and James Jesus Angleton, the CIA intelligence chief, thought they knew Philby better than anyone, and then discovered they had not known him at all. This is a story of intimate duplicity; of loyalty, trust and treachery, class and conscience; of an ideological battle waged by men with cut-glass accents and well-made suits in the comfortable clubs and restaurants of London and Washington; of male friendships forged, and then systematically betrayed. With access to newly released MI5 files and previously unseen family papers, and with the cooperation of former officers of MI6 and the CIA, this definitive biography unlocks what is perhaps the last great secret of the Cold War.

Customer Reviews - A Spy Among Friends

A Spy Among Friends Reviews

An engaging book on a tantalising and ultimately tragic subject, If it starts as a study of friendship, it ends as an indictment * Philip Hensher, Spectator *
No one writes about deceit and subterfuge so dramatically, authoritatively or perceptively. To read A Spy Among Friends is a bit like climbing aboard a runaway train in terms of speed and excitement - except that Macintyre knows exactly where he is going and is in total control of his material * Daily Mail, Books of the Week *
It reads like fiction, which is testament to the extraordinary power of the story itself but also to the skills of the storyteller ... at least as compelling as any of the great fictionalised accounts of Britain's greatest traitor and one of the best real-life spy stories one is ever likely to read ***** * Daily Express *
Illuminating, gripping and moving ... What Macintyre reveals - but not too quickly - is the extent to which those who confided in him, as friends or colleagues or both, were made unwitting accessories to treason * Evening Standard *
Thrilling ... An extraordinary book ... I'm not a lover of spy novels, yet I adored this book. Fictional spies never seem believable to me; novels are populated by stereotypes devoid of nuances that define the individual. That's not the case here. Macintyre's strength is his capacity for intimacy, the very thing Philby, Elliott and Angleton lacked ... Just about perfect * The Times Book of the Week *
Whereas Milne thinks his friend betrayed his country because he genuinely believed in communism, Macintyre's explanation is more intriguing and more convincing * Sunday Times *
Riveting reading ... The transcript of this rendezvous is Ben Macintyre's scoop: the motor of an unputdownable postwar thriller whose every incredible detail is fact not fiction ... A brilliant reconciliation of history and entertainment ... A Spy Among Friends is not just an elegy, it is an unforgettable requiem * Observer *
Gripping ... Ben Macintyre's bottomlessly fascinating new book is an exploration of Kim Philby's friendships, particularly with Nicholas Elliott ... This book consists of 300 pages; I would have been happy had it been three times as long ***** * Mail on Sunday *
The life of Cambridge spy Kim Philby is analysed in this irresistibly readable study * Sunday Times *
Swiftly paced, beautifully written ... It is the small, human details that makes this grim, beguiling story so intoxicating * Scotland on Sunday *
A hugely engrossing contribution to Philby lore ... Such a summary does no justice to Macintyre's marvellously shrewd and detailed account of Philby's nefarious career. It is both authoritative and enthralling ... One of the pleasures of writing about espionage is that you are almost licensed to concoct your own conspiracy theories; all that's demanded is plausibility, and Elliott and Macintyre's gloss on events is highly plausible * William Boyd, New Statesman *
He does not let his readers down here ... The story has been told before, but Macintyre's ability to unbundle intelligence acronyms is unrivalled ... He has thrown a detailed and always entertaining light on the practices and culture of the 20th-century British intelligence through the lens of its most ignominious episode * Sunday Telegraph *
Engaging and atmospheric * Country Life *
Macintyre writes with the diligence and insight of a journalist, and the panache of a born storyteller ... Worthy of John le Carre at his best * John Banville, Guardian *
Fascinating ... The real tragedy, as this book so masterfully reveals, is that Philby's charm and easy manner made fools of so many ***** * Sunday Express *
The doomed relationship between Philby and Elliott makes this old tale of treason seem new enough * Economist *
Conscious that Philby's story has been told many times before, Macintyre tries to find a new angle by interweaving it with that of Nicholas Elliott, probably Philby's closest friend in MI6. This has the merit of creating a rare sense of momentum, as we build towards their final confrontation in Beirut * Sunday Times *

Ben Macintyre is a columnist and Associate Editor on The Times. He has worked as the newspaper's correspondent in New York, Paris and Washington. He is the author of nine previous books including Agent Zigzag, shortlisted for the Costa Biography Award and the Galaxy British Book Award for Biography of the Year 2008, and the no. 1 bestsellers Operation Mincemeat and Double Cross. He lives in North London with his wife and three children.

GOR006525484
A Spy Among Friends: Philby and the Great Betrayal by Ben Macintyre
Ben Macintyre
Used - Very Good
Paperback
Bloomsbury Publishing PLC
2015-03-12
368
1408851784
9781408851784
N/A
Book picture is for illustrative purposes only, actual binding, cover or edition may vary.
This is a used book - there is no escaping the fact it has been read by someone else and it will show signs of wear and previous use. Overall we expect it to be in very good condition, but if you are not entirely satisfied please get in touch with us.