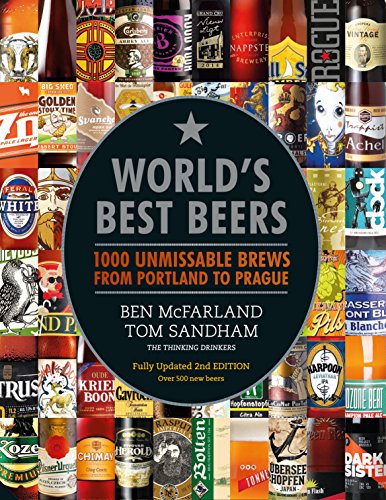 Used Price
$38.99
inc. GST
Free Shipping in Australia
A scintillating saunter through global beer culture that will inform, educate and entertain. It will quench the thirst of beer drinkers whether they be globe-trotting enthusiasts or armchair aficionados.
Reviews:
Trustpilot
Like New Very Good

A scintillating saunter through global beer culture that will inform, educate and entertain whilst quenching the thirst of beer drinkers, whether they are globe-trotting enthusiasts or armchair aficionados.
Ale seekers, beer buffs, and novices alike will gain a fascinating insight into the world of beer, from bitters, to stouts, and sour ales to pale ales and saisons.
Updated to provide an overview of key developments in the beer world, this classic guide explores the craft brewery revolution in the United States which has thrown up hundreds of fascinating and tasty ales, some created and sold in tiny brewpubs, others made in small and medium-sized breweries, from Portland to Denver, Boston to San Diego.
Meanwhile, a beer and food revolution is underway, with beer becoming a valid accompaniment to fine food as lovers of quality ale are championing their tipple as a credible alternative to a glass of wine with dinner. Seven years on from the original publication, this new and revised edition of a much-loved title provides insightful resumes of all that is happening in the constantly changing world of beer. An authoritative, engaging review of the world's best beers to sip and savour!

BEN MCFARLAND is an award-winning beer expert and was voted Britain's Beer Writer of the Year in both 2004 and 2006. Part of The Thinking Drinkers duo, with Tom Sandham, the pair are regular commentators on ale-related matters for many publications, including The Daily Telegraph, The Spectator, The Guardian and Metro. The Thinking Drinkers have performed sell-out shows at the Edinburgh Festival for the past five years. This year's show 'Around the World in 80 Drinks' will have a 9-week run in London and surrounding areas in Autumn 2016, with an 80-date UK tour planned for 2017.

GOR008642917
World's Best Beers: 1000 Unmissable Brews from Portland to Prague by Ben McFarland
Ben McFarland
Used - Like New
Hardback
Jacqui Small
2017-09-21
288
1911127217
9781911127215
N/A
Book picture is for illustrative purposes only, actual binding, cover or edition may vary.
The book has been read, but looks new. The book cover has no visible wear, and the dust jacket is included if applicable. No missing or damaged pages, no tears, possible very minimal creasing, no underlining or highlighting of text, and no writing in the margins.