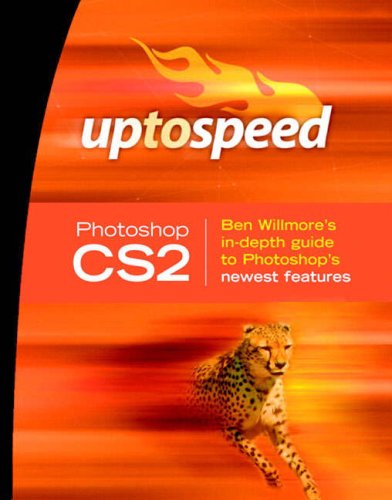 In Stock
$14.49
+10% GST
Rather than sift through hundreds of pages detailing the last Photoshop feature and function, you can go directly to the features that interest you most and get the explanations you desire. This work includes just enough information about older features to make the new ones understandable. It also shows you not only which buttons to push but why.
Very Good
Only 2 left

Photoshop CS2: Up To Speed by Ben Willmore

As the first major Photoshop update since Adobe revamped its product line in 2003, this is the release you've been waiting for-and this is the guide that will get you up to speed on it fastest! Rather than sift through hundreds of pages detailing every last Photoshop feature and function, you can go directly to the new features that interest you most and get the explanations you desire in classic Ben Willmore style-intuitive, crystal clear, and in-depth. By focusing on a single topic-what's new in this version-the award-winning author provides precisely what experienced Photoshop users like yourself have been clamoring for, in exactly the depth you demand. Including just enough information about older features to make the new ones understandable, Ben shows you not only which buttons to push but why.

A senior engineer from NASA once said that this man gave the best technical seminar he ever attended. That same year a computer-phobic who had been struggling with Photoshop for years proclaimed that "He takes the Boogie Man out of Photoshop!" This seems to be Ben Willmore's special gift; he has an uncanny ability to connect with users of every level and mindset; whether it's first-timers taking their first sniff of Photoshop, or razor-sharp nerds and nerdettes who are on the fast track to technical illumination. The common echo that Ben leaves in his wake seems to be "Aha! I finally GET Photoshop!"

To date, Ben has personally taught over 45,000 Photoshop users on three continents. His descriptions of Curves and Channels are thought to be the best in the industry and his breakthrough teaching style of "not-just-how-but-why," has made him the in-house instructor of choice for companies such as Mercedes Benz, Adobe Systems, America Online, the U.S. Airforce, Lexis Nexis and Fisher-Price Toys. His award-winning, best-selling book, Adobe Photoshop Studio Techniques is said to be "Arguably, one of the best Photoshop books ever written." by Photoshop User's publisher, Jim Workman. His latest book 'Photoshop CS2: Up to Speed' is a new concept in books and is the only book focused exclusively on the new features in Photoshop CS2. He is also co-author (with Jack Davis) of "How to Wow: Photoshop for Photographers", and creator of the best-selling Master Series videos.

He continues to be a featured speaker at publishing conferences and events worldwide, including Photoshop World, American Society of Media Photographers (ASMP), Professional Photographers of America (PPA) and the Royal Photographic Society of England. He's a member of the Dream Team for NAPP and writes for numerous digital imaging and photography publications, including a monthly column for Photoshop User magazine. In 2004 he was inducted into the Photoshop Hall of Fame. His reputation as the "expert's expert" prompted NAPP's president, Scott Kelby, to say, "When we get stuck, we call Ben!"

Ben sold his house in the mountains of Colorado in early 2006 and started to live a mobile lifestyle. His home is a 1997 40' Prevost bus (often referred to as a Rock Star Bus) that was converted by Liberty coach into a motorhome. The bus is pretty much a one bedroom apartment on wheels. Ben spends his time driving to speaking events and photographing National Parks and small town America.

GOR001956551
Photoshop CS2: Up To Speed by Ben Willmore
Ben Willmore
Used - Very Good
Paperback
Pearson Education (US)
2005-06-01
192
0321330501
9780321330505
N/A
Book picture is for illustrative purposes only, actual binding, cover or edition may vary.
This is a used book - there is no escaping the fact it has been read by someone else and it will show signs of wear and previous use. Overall we expect it to be in very good condition, but if you are not entirely satisfied please get in touch with us.