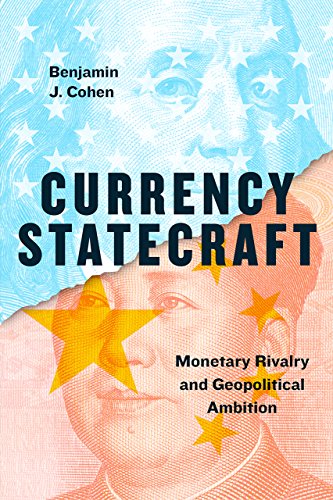 At any given time, a limited number of national currencies are used as instruments of international commerce, to settle foreign trade transactions or store value for investors and central banks. How countries whose currencies gain international appeal choose to use this status forms their strategy of currency statecraft. In different circumstances, issuing governments may welcome and promote the internationalization of their currency, tolerate it, or actively oppose it. Benjamin J. Cohen offers a provocative explanation of the strategic policy choices at play.

In a comprehensive review that ranges from World War II to the present, Cohen convincingly argues that one goal stands out as the primary motivation for currency statecraft: the extent of a country's geopolitical ambition, or how driven it is to build or sustain a prominent place in the international community. When a currency becomes internationalized, it generally increases the power of the nation that produces it. In the persistent contestation that characterizes global politics, that extra edge can matter greatly, making monetary rivalry an integral component of geopolitics. Today, the major example of monetary rivalry is the emerging confrontation between the US dollar and the Chinese renminbi. Cohen describes how China has vigorously promoted the international standing of its currency in recent years, even at the risk of exacerbating relations with the United States, and explains how the outcome could play a major role in shaping the broader geopolitical engagement between the two superpowers.

"Currency Statecraft demands--and rewards--the reader's patience as Cohen meticulously presents his theory. Like a Persian carpetmaker, he weaves his tapestry slowly and with great care until, finally, its full splendor is visible to everyone. By the end, one has acquired an intellectual framework that makes sense of the complex dynamics behind the formation and evolution of global moneys."--Eric Helleiner, University of Waterloo "Global Bookmark"
"Currency Statecraft displays all the characteristics that have earned Cohen his reputation as the world's leading analyst of the politics of global money: it is readable, thoughtful, fascinating, and provocative. Building on his seminal past work, Cohen highlights important relationships between international currencies, power, and geopolitical ambition. Heady stuff and a crucial read for anyone interested in the future of money in this age of geopolitical uncertainty."--Eric Helleiner, University of Waterloo
Benjamin J. Cohen is the Louis G. Lancaster Professor of International Political Economy at the University of California, Santa Barbara.
NGR9780226587691
9780226587691
022658769X
Currency Statecraft: Monetary Rivalry and Geopolitical Ambition by Benjamin J Cohen (University of California Santa Barbara)
Benjamin J Cohen (University of California Santa Barbara)
New
Hardback
The University of Chicago Press
2019-01-08
208
N/A
Book picture is for illustrative purposes only, actual binding, cover or edition may vary.
This is a new book - be the first to read this copy. With untouched pages and a perfect binding, your brand new copy is ready to be opened for the first time
Trustpilot