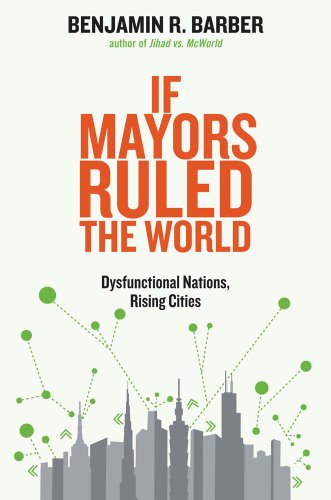 If Mayors Ruled the World
by Benjamin R. Barber

If Mayors Ruled the World Summary

Can cities solve the biggest problems of the twenty-first century better than nations? Is the city democracy's best hope?

In the face of the most perilous challenges of our time-climate change, terrorism, poverty, and trafficking of drugs, guns, and people-the nations of the world seem paralyzed. The problems are too big, too interdependent, too divisive for the nation-state. Is the nation-state, once democracy's best hope, today democratically dysfunctional? Obsolete? The answer, says Benjamin Barber in this highly provocative and original book, is yes. Cities and the mayors who run them can do and are doing a better job. Barber cites the unique qualities cities worldwide share: pragmatism, civic trust, participation, indifference to borders and sovereignty, and a democratic penchant for networking, creativity, innovation, and cooperation. He demonstrates how city mayors, singly and jointly, are responding to transnational problems more effectively than nation-states mired in ideological infighting and sovereign rivalries. Featuring profiles of a dozen mayors around the world-courageous, eccentric, or both at once-If Mayors Ruled the World presents a compelling new vision of governance for the coming century. Barber makes a persuasive case that the city is democracy's best hope in a globalizing world, and great mayors are already proving that this is so.

If Mayors Ruled the World Reviews

"If you like cities you will love this wide-ranging book that captures the energy, excitement and importance of what is going on in the world's great urban centers."-Fareed Zakaria, CNN

". . . .Makes the intriguing, provocative, and counter-intuitive argument the . . . cities and the mayors who run them are the last best hope for a safer, more prosperous, and more just future. If Mayors Ruled The World is informative and imaginative."-Glenn C. Altschuler, Huffington Post

"Barber argues . . . persuasively, that city governments are closer to their people than national ones and as such are better at winning the trust of citizens - though the same goes for rural forms of local government."-Ben Rogers, Financial Times

"In an impassioned love letter to cities and their political leaders, Barber (Jihad vs. McWorld) celebrates the diversity and ferment that embody urban life."-Publishers Weekly

"A provocative look at how cities can and do lead from the front in addressing the most pressing issues of our time."-Michael R. Bloomberg, 108th Mayor of New York City and founder of Bloomberg LP

"If you care about cities, read If Mayors Ruled the World. It is the most important book on cities, their leadership and how they can make the world a better place to come along in years. Ben Barber has written a tour de force."-Richard Florida, author of The Rise of the Creative Class and The Great Reset

"Political theorist Benjamin Barber's latest book is more than just theory. Networked governance by the world's cities is actually happening, and If Mayors Ruled the World is the book of the movement. Once again, Barber is ahead of the curve."-Colorado Governor John Hickenlooper


"Benjamin Barber shows us how cities are traversed by networks of all sorts and how inter-city networks traverse the world. Both extremes and all that happens in between are brought to life through empirical details and exciting narratives."-Saskia Sassen, Columbia University and author of Cities in a World Economy

Benjamin R. Barber is senior research scholar at the Center on Philanthropy and Civil Society, the Graduate Center, the City University of New York. He is also president and founder of the Interdependence Movement and the author of seventeen books, including Jihad vs. McWorld and Strong Democracy. Barber's project for a Global Parliament of Mayors has attracted scores of urban leaders and intercity networks and is on course for a pilot convening in 2016. He lives in New York City.

GOR011101137
If Mayors Ruled the World: Dysfunctional Nations, Rising Cities by Benjamin R. Barber
Benjamin R. Barber
Used - Like New
Paperback
Yale University Press
2014-08-01
432
0300209320
9780300209327
N/A
Book picture is for illustrative purposes only, actual binding, cover or edition may vary.
The book has been read, but looks new. The book cover has no visible wear, and the dust jacket is included if applicable. No missing or damaged pages, no tears, possible very minimal creasing, no underlining or highlighting of text, and no writing in the margins.