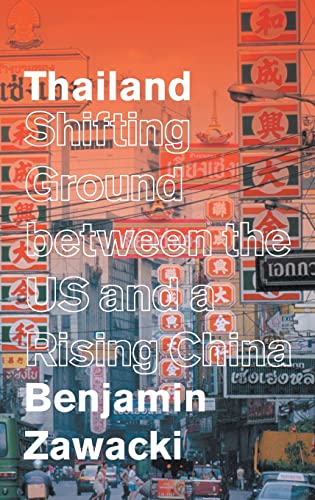 Thailand: Shifting Ground between the US and a Rising China by Benjamin Zawacki

Thailand was a key ally of the United States after WWII, serving as a bulwark against communism in Southeast Asia and as a base for US troops during the Vietnam War. In return, the US provided it with millions of dollars in military and economic aid, and staunchly supported the country's various despotic regimes. And yet, the twenty-first century has witnessed a striking reversal in Thailand's foreign relations: China, once a sworn enemy, is becoming a valued ally to the military government.

In this authoritative modern history, Benjamin Zawacki tells the story of Thailand's changing role in the world order. Featuring major interviews with high ranking sources in Thailand and the US, including deposed prime minister Thaksin Shinawatra, Thailand is a fascinating insight into the inner workings of the Thai elite and their dealings with the US and China.

'Presents a clear-eyed and well-informed analysis of a critical moment, in which ideals of democracy and human rights, never deeply rooted, are giving way as Thailand increasingly sees its future tied to a rising China.'
Seth Mydans, Southeast Asia correspondent for The New York Times

'A must-read for those concerned by Chinese ascendency in Southeast Asia and its implications on human rights in the coming decades.'
Tyler Giannini, Human Rights Program Director, Harvard Law School

'Zawacki skillfully tells the story of America's oldest Asian ally, exploring how equivocation in Washington and dysfunction in Bangkok is allowing a resurgent China to extend its talons into a disturbingly authoritarian Thailand.'
Charlie Campbell, Beijing correspondent for TIME

'Zawacki's carefully documented and balanced analysis lifts the curtain on a gradual, often invisible, but seemingly inexorable geopolitical shift. It provides a thorough explanation of the circumstances that have led Thailand, once seen as an unequivocally staunch U.S. ally, to lean increasingly toward a pragmatic and strategically assertive China.'
Michael Herzfeld, Harvard University

'Presents a powerful counter-argument to the conventional wisdom that China's economic rise alone explains Thailand's pivot from the US to China. In thoroughly researched detail, the book traces a sorry trail of US condescension and clumsy diplomacy.'
Daniel Fineman, author of A Special Relationship: The United States and Military Government in Thailand

'Now comes the rare American deeply informed of a "faraway country" of whose people "we know nothing", in a profoundly disturbing study of how the world-changing US-China dynamic unfolds in Thailand. Read and weep.'
Jeffrey Race, author of War Comes to Long An: Revolutionary Conflict in a Vietnamese Province

'An important contribution to the field of Thailand's foreign relations.'
Contemporary Southeast Asia

'The US has failed to reliably present democracy and human rights as alternatives to the China Model. It has allowed its 'interests' to override its 'values,' and hence is vulnerable to accusations of hypocrisy. Zawacki argues that the US must correct for these two failures and make the kind of commitment to Asia that Obama promised but never delivered.'
New York Review of Books

Benjamin Zawacki was a visiting fellow in the Human Rights Program at Harvard Law School in 2014-15, and a term member on the Council on Foreign Relations through 2016. He was Amnesty International's Southeast Asia researcher for five years, and served as a policy advisor to President Jimmy Carter and two other "Elders" in Myanmar. A regular contributor to the media in Southeast Asia, he has lived in Thailand for 15 years.

GOR010687975
9781783608706
1783608706
Thailand: Shifting Ground between the US and a Rising China by Benjamin Zawacki
Benjamin Zawacki
Asian Arguments
Used - Very Good
Hardback
Zed Books Ltd
2017-10-15
384
N/A
Book picture is for illustrative purposes only, actual binding, cover or edition may vary.
This is a used book - there is no escaping the fact it has been read by someone else and it will show signs of wear and previous use. Overall we expect it to be in very good condition, but if you are not entirely satisfied please get in touch with us
Trustpilot