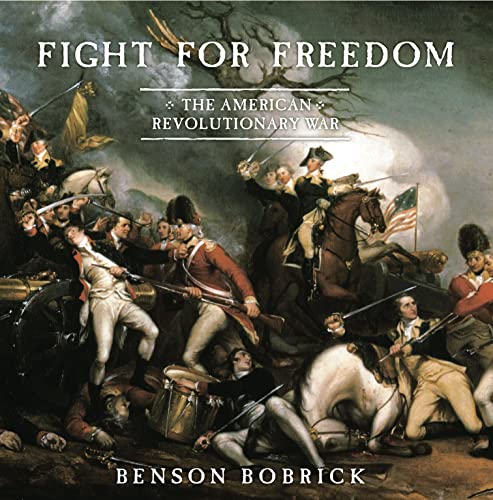 Fight for Freedom: The American Revolutionary War
by Benson Bobrick

In Stock
$13.49
+10% GST
The renowned historian pens a passionate chronicle of the American Revolution for young readers that contains personal anecdotes from soldiers and profiles of the many historical luminaries involved. Includes period paintings, political cartoons, and campaign and battlefield maps.
Very Good Good
Only 2 left

Fight for Freedom: The American Revolutionary War by Benson Bobrick

Renowned historian Benson Bobrick has written a moving chronicle of the American Revolution for young readers. From the first stirrings of unrest under British rule at the Boston Tea Party, to the treachery of Benedict Arnold at West Point, to George Washington's Christmas Eve surprise attack at the Battle of Trenton, to the British surrender at the Battle of Yorktown, Fight for Freedom explores the war that created one independent nation out of thirteen diverse colonies.
Fight for Freedom contains personal anecdotes from soldiers and civilians, as well as profiles of the many historical luminaries who were involved in America's fight for independence, such as George Washington, King George III, Abigail Adams, Benjamin Franklin, John Paul Jones, Thomas Jefferson, and Lord Cornwallis. Bobrick also explores the origins of colonialism in the New World, the roles women and Native Americans played during the American Revolution, the intricacies of building a new government, and the fate of those who remained loyal to the British crown after the onset of war.
Bobrick's dynamic narrative is highlighted with many period oil paintings, political cartoons, and key campaign and battlefield maps, making Fight for Freedom the ultimate book on the American Revolution for kids.

Benson Bobrick earned his doctorate from Columbia University and is the author of several critically acclaimed works, including Wide as the Waters: The Story of the English Bible and the Revolution It Inspired and Angel in the Whirlwind: The Triumph of the American Revolution. In 2002 he received the Literature Award of the American Academy and Institute of Arts and Letters. He and his wife, Hilary, live in Vermont.

GOR003632634
Fight for Freedom: The American Revolutionary War by Benson Bobrick
Benson Bobrick
Used - Very Good
Hardback
Unknown
0
0689864221
9780689864223
N/A
Book picture is for illustrative purposes only, actual binding, cover or edition may vary.
This is a used book - there is no escaping the fact it has been read by someone else and it will show signs of wear and previous use. Overall we expect it to be in very good condition, but if you are not entirely satisfied please get in touch with us.