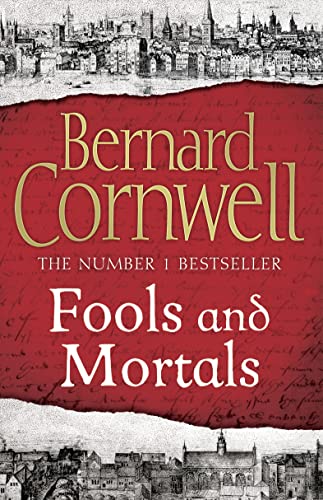 Fools and Mortals
by Bernard Cornwell

A dramatic new departure for international bestselling author Bernard Cornwell, FOOLS AND MORTALS takes us into the heart of the Elizabethan era, long one of his favourite periods of British history.

Fools and Mortals by Bernard Cornwell

A dramatic new departure for international bestselling author Bernard Cornwell, FOOLS AND MORTALS takes us into the heart of the Elizabethan era, long one of his favourite periods of British history.

In the heart of Elizabethan England, Richard Shakespeare dreams of a glittering career in one of the London playhouses, a world dominated by his older brother, William. But he is a penniless actor, making ends meet through a combination of a beautiful face, petty theft and a silver tongue. Increasingly estranged from his brother as William's star rises, Richard's onetime gratitude is souring and he is sorely tempted to abandon family loyalty.

So when a priceless manuscript goes missing, suspicion falls upon Richard, forcing onto a perilous path through a bawdy and frequently brutal London. Entangles in a high-stakes game of duplicity and betrayal which threatens not only his career and potential fortune, but also the lives of his fellow players, Richard has to call on all he has now learned from the brightest stages and the darkest alleyways of the city. To avoid the gallows, he must play the role of a lifetime ...

Fools and Mortals is a richly portrayed tour de force with all Bernard Cornwell's hallmark storytelling and a remarkable cast of characters: you walk the streets, explore the palaces, experience the scandals, rivalries and fierce ambitions, and stand side-by-side with the men and women of Elizabethan London.

`Sharp and funny ... His combination of wit, adventure and deft characterisation succeeds triumphantly' THE TIMES

`Fools and Mortals is a delight. Witty and knowledgeable in its evocation of Shakespearean London ... highly enjoyable' BBC HISTORY MAGAZINE

`Cornwell not only succeeds in creating an engaging story, but also in celebrating the difficulties and delights, at any time in history, of putting on a show' THE SUNDAY TIMES

`With all the vivid history that is his trademark, Bernard Cornwell transports the readers to the playhouses, backstreets and palaces of Shakespeare's London with added depth and compassion, and a likeable hero' Philippa Gregory

`A cracking novel ... the atmosphere and intrigues of this dangerous time are vividly realised. A smash hit' THE TIMES

`Story and characters crackle off the page as do the stink and violence of Elizabethan London. The author of the Sharpe and Last Kingdom bestsellers has pulled off a surprise for his readers - and a terrific one at that' Elizabeth Buchan, DAILY MAIL

The Times Saturday Review Book of the Month

`Cornwell is an enthusiastic amateur dramatist. His portrayal of the actors' rivalries and superstitions is sharp and often funny. His combination of wit, adventure and deft characterisation is a triumphant departure from his usual territory' THE TIMES

GOR008726898
Fools and Mortals by Bernard Cornwell
Bernard Cornwell
Used - Very Good
Hardback
HarperCollins Publishers
2017-10-19
384
000750411X
9780007504114
N/A
Book picture is for illustrative purposes only, actual binding, cover or edition may vary.
This is a used book - there is no escaping the fact it has been read by someone else and it will show signs of wear and previous use. Overall we expect it to be in very good condition, but if you are not entirely satisfied please get in touch with us.