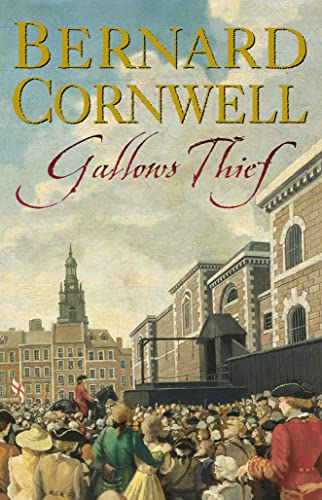 1820s Britain: after the wars with France, when unemployment was high and soldiers could be paid off, when the government was desperately afraid of social unrest, any crime was drastically punished and thousands were hung. But one could petition the King and an investigation might ensue...

1820s Britain: after the wars with France, when unemployment was high and soldiers could be paid off, when the government was desperately afraid of social unrest, any crime was drastically punished and thousands were hung. But one could petition the King and an investigation might ensue...

The man in the dark cell in Newgate Prison was due to hang in a week. He had been found guilty of murdering the aristocrat whose portrait he was painting. He claimed to be innocent - but then the hangman had never hung a guilty man, he said. But even in 1820, the Home Secretary could occasionally use his powers to grant mercy if his investigator found cause and Rider Sandman, once of the First Foot Guards, is given the job, since justice must be seen to be done as the accused man's mother is seamstress to the Queen.

Rider Sandman, a hero of Waterloo, has family debts to repay but when his first steps in the investigations produce a sizeable bribe to look the other way, this only arouses his smouldering anger over the condition of England, a country which he and others in Wellington's army had fought to preserve. Stepping between gentlemen's clubs and taverns, talking to aristocrats, fashionable painters, their models, and their mistresses, dodging professional cut-throats and deceptive swordsmen, Sandman uncovers a conspiracy of silence, a group whose proudest boast was that they would do anything for any one of them.

Sandman is a wonderful character, as yet undaunted by the sleazy streets, dank jails or the looming scaffold, and uncorrupted by politicians, sneering gentlemen or frightening bruisers, an investigator in the making and a brilliant, but very different, hero for all Bernard Cornwell fans.

`Bernard Cornwell is a literary miracle. Year after year, hail, rain, snow, war and political upheavals fail to prevent him from producing the most entertaining and readable historical novels of his generation...Cornwell at his best is utterly compelling. And this is Cornwell at his best.' Daily Mail

`Page for page, sentence for sentence, scene for heart-stopping scene GALLOWS THIEF is the strongest historical novel I have read this year...he tells a cracking yarn and fills it with vivid characters and writes crisp dialogue and gets the period detail right...it is hard to stop reading...it is masterly.' Sunday Telegraph

GOR000524735
Gallows Thief by Bernard Cornwell
Bernard Cornwell
Used - Very Good
Hardback
HarperCollins Publishers
2001-10-01
352
0007127154
9780007127153
N/A
Book picture is for illustrative purposes only, actual binding, cover or edition may vary.
This is a used book - there is no escaping the fact it has been read by someone else and it will show signs of wear and previous use. Overall we expect it to be in very good condition, but if you are not entirely satisfied please get in touch with us.