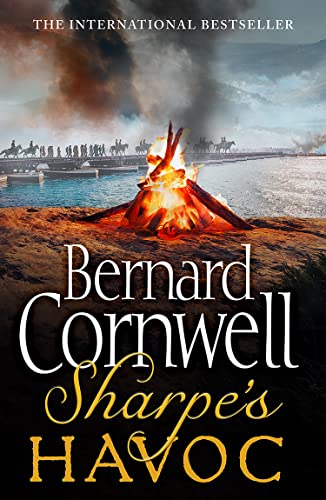 A small British army is stranded when the French invade northern Portugal and Lieutenant Richard Sharpe meets the future Duke of Wellington.

A small British army is stranded when the French invade northern Portugal and Lieutenant Richard Sharpe meets the future Duke of Wellington.

Sharpe is stranded behind enemy lines, but he has Patrick Harper, his riflemen and he has the assistance of a young, idealistic Portuguese officer.

When he is joined by the future Duke of Wellington they immediately mount a counter-attack and Sharpe, having been the hunted, becomes the hunter once more. Amidst the wreckage of a defeated army, in the storm lashed hills of the Portuguese frontier, Sharpe takes his revenge.

GOR003359711
Sharpe's Havoc: The Northern Portugal Campaign, Spring 1809 (The Sharpe Series, Book 7) by Bernard Cornwell
Bernard Cornwell
The Sharpe Series
Used - Very Good
Paperback
HarperCollins Publishers
2011-09-15
368
0007428081
9780007428083
N/A
Book picture is for illustrative purposes only, actual binding, cover or edition may vary.
This is a used book - there is no escaping the fact it has been read by someone else and it will show signs of wear and previous use. Overall we expect it to be in very good condition, but if you are not entirely satisfied please get in touch with us.