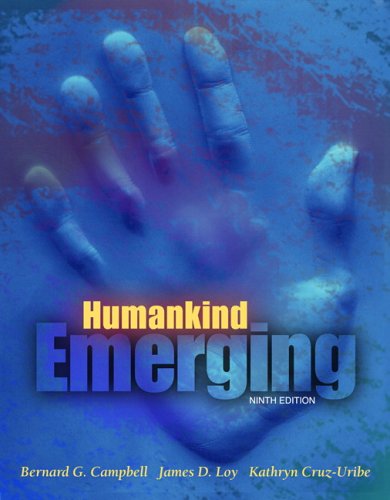 The most comprehensive, up-to-date, and readable introduction to the field of human evolution.

The ninth edition of Humankind Emerging tells the story of how, when, and why the human lineage developed from ape-grade ancestors. In Part I, Chapters 1 and 2 present a short history of the rise of evolutionary theory and the science of genetics, followed by a description of the various mechanisms that produce evolutionary change. In Part II, Chapters 3-5put humans in their proper context among the primates, first discussing those aspects of modern primate behavior that help to interpret human prehistory and then describing the fossil evidence for the early stages of primate evolution. In Part III,Chapters 6 and 7 describe the australopiths-members of the subtribe Australopithecina and the first representatives of humans' zoological tribe, Hominini. Part IV consists of nine chapters that detail the anatomical, cognitive, and behavioral evolution of the genus Homo and its various premodern and modern species. Here the second hominin subdivision-the subtribe Hominina-is described and interpreted. The book ends with Part V in which Chapter 17 discusses modern human diversity, the question of biological races of humans, and the challenges facing humanity in the future.

The current edition provides an absolutely up-to-date survey of the hominin fossil species including descriptions of the oldest members of the tribe-Sahelanthropus, Orrorin, and Ardipithecus kadabba (Chapters 6 and 7)-as well as the recently discovered dwarfed species from Indonesia, Homo floresiensis (expanded post-script in Chapter 15). Updates of the taxonomic scheme for the human lineage bring the text into agreement with current paleoanthropological usage. Australopiths are assigned to the subtribe Australopithecina, species of the genus Homo are placed in the subtribe Hominina, and the two subtribes are combined to form the tribe Hominini. Great apes and hominins now are combined in the family Hominidae. The newest edition also expands the fossil and behavioral descriptions of Homo heidelbergensis and identifies this species as the first hominin type to show the "hunting lifestyle." Speculations about societal changes that may have accompanied the beginning of the hunting way of life (Chapter 12) are updated. The latest studies of the neural regions and connections responsible for human speech and language (Chapter 13) are described as well. In-text citations for all source materials are provides as well as a full bibliography-features that allow for in-depth study. Over 30% of the references are from 2000 or later.

Paleoanthropologist Bernard Campbell received his Ph.D. from Cambridge University. He has taught at that institution, Harvard University, and the University of California at Los Angeles, and has conducted field work in South and East Africa and in Iran. Although retired from active teaching, Professor Campbell continues to publish widely on the evolution of human behavior and its ecological setting. Professor Campbell originally developed the text Humankind Emerging and guided it through six editions.

James Loy is a Professor of anthropology at the University of Rhode Island. After earning a Ph.D. from Northwestern University, Professor Loy conducted research on the sexual behavior of Old World monkeys for over twenty years. He joined the publication team of Humankind Emerging with its seventh edition.

Kathryn Cruz-Uribe is an archaeologist specializing in the analysis of animal bones from archaeological sites. She has more than twenty years of fieldwork experience, primarily in South Africa. She received an A.B. in anthropology and art history from Middlebury College, Vermont, and her A.M. and Ph.D. in anthropology from the University of Chicago. Dr. Cruz-Uribe currently serves as Professor of Anthropology and Dean of the College of Social and Behavioral Sciences at Northern Arizona University, in Flagstaff, Arizona.

1. The Search for Human Origins.

Geology Comes of Age: The Theory of Deep Time.

The Advent of Evolutionary Theories.

Gregor Mendel and the Problem of Heredity.

Turn of the Century: Mendel Rediscovered, Natural Selection Out of Favor.

Levels of Selection and Change.

Sources of Genetic and Phenotypic Variation.

II. THE ORIGIN OF HUMANKIND.

3. Humans among the Primates.

4. The Behavior of Living Primates.

5. Apes and Other Ancestors: Prehominin Evolution.

The Science of Paleoanthropology.

7. East Africa and the Sahel: A Multitude of Australopiths.

A Half-Century of Australopiths from East Africa and the Sahel.

Fossils from Kenya and Ethiopia Reveal Details of P.boisei Anatomy.

Back in Time: Australopiths from the Miocene.

Lifestyles of the Australopiths.

8. East Africa: The Advent of Homo

First Evidence of the Hominans.

9. The Evolution of Hominin Behavior.

Eugene Dubois and the Quest for the Missing Link.

Evidence of Homo erectus in Europe: Many Artifacts, Few Fossils.

More Fossils and Some Surprising Dates from Asia.

The Anatomy of Homo erectus.

12. Homo heidelbergensis and the Advent of the Hunting Way of Life.

The Descendants of Homo erectus.

The Anatomy of Homo heidelbergensis.

The Advent of the Hunting Lifestyle: Technological and Social Developments.

The Descendants of Homo heidelbergensis.

13. The Evolution of Language and the Brain.

Neandertals in Europe and Beyond.

Surviving in an Ice Age World.

15. The Final Transformation: The Evolution of Modern Humans.

Fate of the Archaic Humans.

Dispersals from the African Homeland.

16. The Advent of Modern Culture

The Story of Humankind.

The Question of Race.

Challenges for the Future.

Appendix I: The Genetic Code.

GOR010752107
Humankind Emerging by Bernard G. Campbell
Bernard G. Campbell
Used - Like New
Paperback
Pearson Education (US)
2005-08-01
560
0205423809
9780205423804
N/A
Book picture is for illustrative purposes only, actual binding, cover or edition may vary.
The book has been read, but looks new. The book cover has no visible wear, and the dust jacket is included if applicable. No missing or damaged pages, no tears, possible very minimal creasing, no underlining or highlighting of text, and no writing in the margins.